There are two varieties of cypress commonly found throughout the Southeast: bald cypress and pond cypress. Both are deciduous conifers, shedding their leaves and cones in the fall, and both are known for their tolerance of wet sites and their root outgrowths known as "knees."

Cypress trees are ideal for landscapes that experience flooding with water up to several feet deep, but can also be grown in drier areas. The "knees" that are so closely associated with cypress are less likely to appear with trees planted on drier sites. 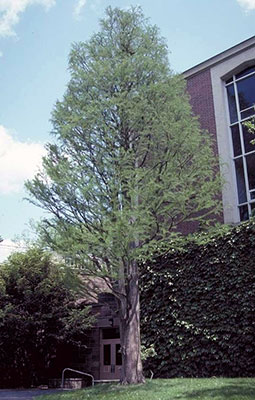 Pond cypress (Taxodium ascendens) grow in the Southeast from Louisiana to Virginia, and are usually found along the edge of swampy ground where water is standing. However, they grow well in drier landscapes, and tolerate drought better than expected.

In the home landscape, pond cypress are often preferred over bald cypress because they're comparitively smaller and more compact, though pond cypress can still reach 80 feet tall. They're also less likely to put up "knees," and any knees that do pop up will be shorter and rounder.

They add interest in the fall, when the leaves turn from green to light yellow or copper colored before falling. For tight spaces, there's a cultivar called 'Prairie Sentinel' that's been bred to grow in a very upright, narrow form.

In the wild, bald cypress (Taxodium distichum) can live up to 600 years, and are usually found near streams and rivers, as well as swamps with slow moving water. They grow throughout the Atlantic coastal region, as far west as southeastern Texas, and as far north as Delaware. The massive, buttressed trunks found on older bald cypress are thought to develop in response to growing in soft, wet soil.

But these beautiful trees make a great addition to any property, adding an attractive vertical accent. Bald cypress can be grown in dry locations and have even been used in cities like Tampa as street trees. In the autumn, the feathery foliage of bald cypress will change to a copper color before falling off. The leaves return in the spring with a flush of green.

Purchase and plant container-grown bald cypress trees at any time of the year. Be sure to water your tree on a regular basis until it’s established.

There are several cultivars: 'Monarch of Illinois' has a very wide-spreading form, 'Shawnee Brave' has a narrow, pyramidal form, and 'Pendens' has drooping branchlets and large cones. 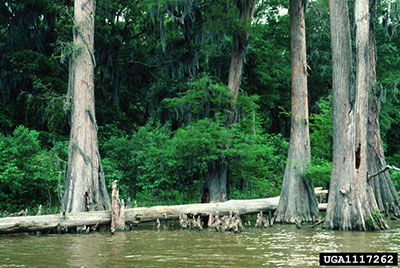