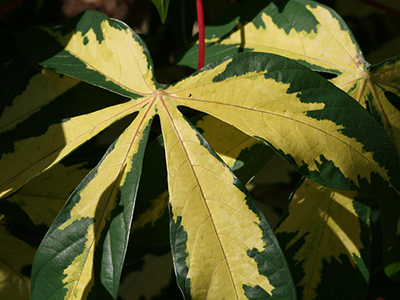 Finding edible plants to grow in the summer garden can be a real challenge. Turning to some of the less well-known vegetables can be just what Florida gardeners need to keep their edible gardens producing through the summer heat.

While the roots are the most valuable parts of these plants, it does also have ornamental value as well. The large, palmate leaves are dark green with reddish veins.

Roots develop in clusters of 4 to 8 at the base of the stem. They're 1 to 4 inches in diameter and are generally 8 to 15 inches long. The pure white interiors are firmer than potatoes and have a very high starch content. The roots are also covered in a thin, reddish brown, fibrous bark. This bark contains the toxin hydrocyanic (prussic) acid, which must be removed by washing, scraping, and heating. It's easier to peel the bark off with a knife than a traditional vegetable peeler.

There is a bitter and a sweet type of cassava. The roots of the sweet-type contain only a small amount of prussic acid and are prepared boiled as a vegetable. Leaves can also be boiled and eaten; they should not be eaten raw because they also contain the toxic prussic acid.

Cassava roots are also used as animal feed, and are processed for glue, laundry starch, and tapioca pudding.

These plants need 8 to 11 frost-free months in order to produce edible roots. Soil preparations and fertilizer use for cassava is the same as for sweet potatoes. Plant short 10-inch sections of the stem 2 to 4 inches deep in the soil. Plants should be spaced 4 feet apart in rows that are spaced at intervals of 4 feet. To harvest, roots are dug or pulled and used soon after harvesting since they deteriorate rapidly. 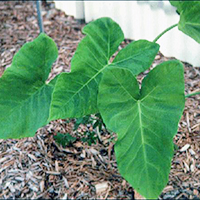 Malanga is the most popular form of cocoyam, which is a name generally used for several species of Xanthosoma, the common names of which are often used interchangeably.

Malanga has large green leaves are about 2 feet wide and 2.5 feet long and generally resembles an elephant ear plant. The upper leaf surface of malanga leaves is smooth and sometimes waxy while the lower leaf surface is ribbed.

Malanga plants can grow to 5 or more feet tall. A large central tuber (corm) forms with a cluster of cormels (lateral tubers) which are grayish brown to black in color. These cormels are edible, as are the leaves which can be eaten as greens.

Malanga should be started in the spring, as the plants need 9 to 10 months to mature. Propagation can be done a number of ways; you can plant the top of the tuber (head), the whole main tuber, pieces of the main tuber, or individual secondary tubers. Set propagated materials 3 to 5 inches below the surface. Be aware that plants are injured by frosts.

Harvested tubers can be kept in good condition for a few weeks at room temperature and for longer when refrigerated. Tubers should be washed and peeled before cooking; some tubers are so hard that they need to be cooked even before peeling. Tubers can be baked, mashed, fried, or otherwise used as potatoes. 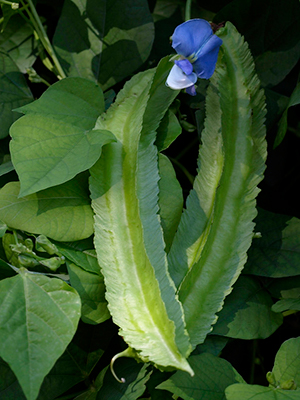 As with other legumes, these bean plants can help add nitrogen to your soils. They perform best in South Florida when grown during the winter. In North and Central Florida these plants perform best when grown in the fall. Winged bean plants need short days to initiate flowering; however, they are sensitive to frost.

The pointed, 3 to 6 inch-long leaves are produced on weak vining stems. Four angled leaf-like "wings" run lengthwise to the pods. Bean pods are 6 to 9 inches long when mature. They are prepared and eaten the same way as bush snap beans. When they are mature, seeds are round and green and similar to soybeans. Some varieties of this plant produce a large tuberous root that can be eaten cooked or raw. Winged bean roots and seeds are high in protein.

Malabar spinach (Basella spp.) is not a true spinach (Spinacia oleracea), which is a cool-season vegetable in Florida. It has many names including Ceylon spinach, climbing spinach, gui, acelga trepadora, bretana, libato, vine spinach, and Malabar nightshade. However, the edible leaves formed on this vining plant resemble spinach leaves and can be used the same way. 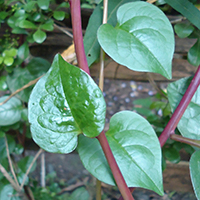 Malabar spinach is originally from India and is widely cultivated in the tropics, especially in moist lowlands. Plants grow best during warm, rainy periods as moisture is important. When cooked, Malabar spinach is less slick in texture than other greens. In Bengali cuisine, it's cooked with chopped onions, hot chilies, and a little mustard oil.

A small amount of shade is beneficial for these plants, although they can be grown in full sun. Malabar spinach grows well from either seeds or cuttings, and the vines will perform best when grown on a trellis. Two plants will generally produce sufficient quantities of leaves to provide a small family with spinach during summer and fall.

Not only are these plants able to provide you with tasty greens, the vines can be quite ornamental. The species Basella rubra has red leaves while B. alba has green leaves. 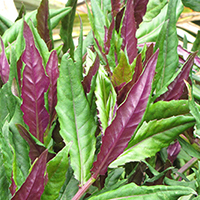 There are two species of Okinawa spinach; Gynura crepioides has green leaves, and Gynura bicolor has green and purple foliage. This plant is in the Asteraceae family, the same family as sunflowers. It is native to Japan, Northeastern India to Nepal, Myanmar, Southern China, and Japan.

Okinawa spinach is known by many names: Hung tsoi, dawn dewa, leaves of the gods, Mollucan spinach, handama, gynura, purple spinach, or red vegetable. In its native range, it has other names as well.

Okinawa spinach thrives particularly well in Southwest Florida. It can be harvested mostly year-round in the tropics and subtropics and is an annual in cooler climates.

These plants grow in full sun to partial shade, need average waterings, and reaches 2 to 3 feet tall. Okinawa spinach produces yellow flowers, but doesn't produce seeds. Flowers should be cut off to help the plant focus energy on leaf production. The plant spreads quickly but isn't overly aggressive. Harvesting increases production, so the more you take the more you'll produce. Harvest the leaves and the top four to six inches of shoots; plants can take a severe pruning.

Since it doesn't produce seeds, plants are propagated by herbaceous stem cuttings. Just stick cuttings directly into the soil in your garden. Plants should be spaced 18 to 24 inches apart. Okinawa spinach is also well-suited for container gardening.

Amaranth is another leafy green that can hold up in the heat of Florida's summers. There are several cultivated species in the Amaranthus genus which are all collectively called amaranths. Tampala, hon-toi-moi, bush greens, pigweed, and Chinese spinach are some of the names for the individual types of amaranths. In Florida, you will also hear it referred to as callaloo, as it's closely associated with the Caribbean dish callaloo. Leaf shapes and color vary considerably; some are red, others green, and some are variegated (usually with purplish patterns on green leaves). 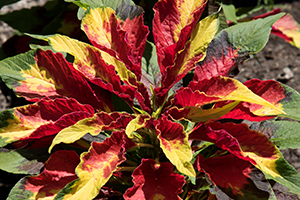 When planting, directly broadcast seeds and then thin the seedlings to 3 inches apart. You can eat the young seedlings you have thinned out, as well as mature leaves. Amaranth is killed off by cold weather, so plant during the warm months.

Many amaranth species grow vigorously in Florida gardens. The green-leaved tampala is one that can thrive in your edible garden. A. gangeticus L. is commonly cultivated and eaten as boiled greens. This species is an upright, branched annual with green or red leaves, depending on the variety. Young leaves and shoot tips are eaten between 3 to 6 weeks after seeds are sown. Some amaranth species produce an edible seed head that forms a fuzzy spikelet. When heated, the seeds can burst like popcorn.

Amaranthus edulis is a grain amaranth that is exceptionally high in lysine, a critical amino acid that is often not found in plants. For this reason, some people—particularly vegetarians—incorporate it into their diets. Most commonly, grain amaranth is ground into flour to make breads, noodles, pancakes, cereals, cookies, and more. Wild amaranth is edible but not as reliably tasty as cultivated varieties.

Other Heat-tolerant Vegetables on Gardening Solutions