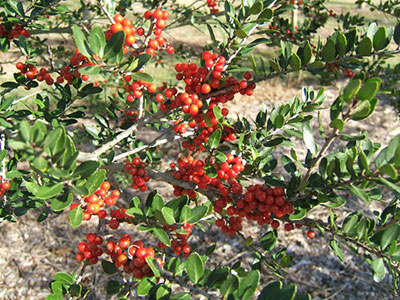 Add wildlife interest and winter color to your yard with yaupon holly, one of the most durable and adaptable of the small-leaved evergreen hollies for Florida landscapes.

Like many other hollies, yaupon holly (Ilex vomitoria) is an evergreen shrub or tree that is loved for the colorful berries it produces on the female plants. Yaupon is dioecious which means that male and female flowers are born on separate plants; male yaupon hollies do not produce berries. The berries can be red, orange, or even yellow, and birds and other wildlife will feed on them through the winter months.

Both male and female plants produce small white flowers in spring which attract pollinators. Their small leaves are oval, serated, and dark green. Yaupon hollies' dense and shrubby evergreen growth make them ideal for screens or hedges while also providing habitat for songbirds and other wildlife.

Yaupon holly is native to the South, but there are also several cultivars offering a variety of forms — from attractive dwarf types that resemble boxwood to large upright or weeping forms (read more about weeping yaupon holly here). Large-growing yaupon hollies can grow to be between 15 and 25 feet tall and will have a spread of about the same width. In the landscape, these evergreen beauties take about ten years to develop the distinctive vase shape they are known for. You can train your yaupon holly into a small tree with the lower branches removed, revealing the interestingly contoured multiple trunks. This versatile plant can also be used as a hedge, screen, barrier, or even in Bonsai. Yaupon holly's fast growth rate and small leaves make it a perfect choice for topiary. 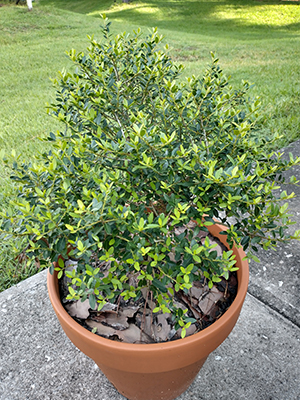 A few of the available cultivars include: 'Jewel', the females of which produce lots of berries; 'Nana', a dwarf, compact male shrub; 'Schillings', another male dwarf; and 'Aureo', which produce yellow berries.

Best suited for USDA hardiness zones 7a-9b, yaupon hollies should be planted in a spot where they'll receive full or partial sun. They are both drought and salt tolerant, meaning this plant can find a home in a variety of landscapes.

Remember to purchase a female holly if you want a plant that produces berries. Your best bet is to shop for a holly during the winter and purchase one that already has berries on it. Some cultivars, like 'Nana' and 'Schillings', are all-male plants.

Plant your yaupon holly using the same techniques you'd use to plant any shrub or tree. Dig a hole that is at least one-and-a-half times as wide as the root ball but slightly shallower. Then remove any roots that are circling around the inside of the pot or around the trunk, and shave off the outer layer of the root ball using a sharp knife or shovel.

Yaupon holly readily sprouts from the roots; these sprouts will need to be pruned to the ground two or three times a year to keep the base of your plant looking neat.

While yaupon holly is relatively free of serious pests and diseases, scale, leaf miners, mites, and aphids can sometimes be a problem.

A Note on Names 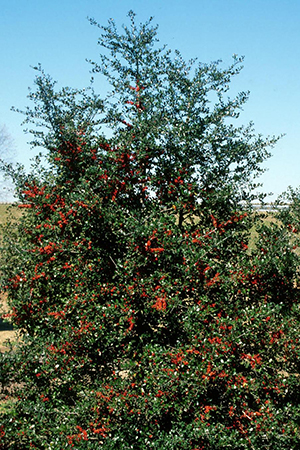 The leaves of the yaupon contain caffeine. In fact, the yaupon boasts the highest caffeine content of any plant native to North America. For centuries peoples indigenous to the Americas enjoyed yaupon holly tea on a daily basis, but it was also used ceremonially. One particular ritual involved consuming excessive amounts of tea in order to induce vomiting and diarrhea. The tea was brewed strongly and may have contained other plant material. Unfortunately for this delicious plant, the ritual was reported to interested botanists and their first impression of the drink stuck. Thus the alarming scientific name: Ilex vomitoria.

We hope this misnomer will not deter interested gardeners from making their own tea. According to a 2009 study by researchers from the University of Florida and Texan A&M, "yaupon is a viable caffeine alternative for North Americans living within its range on the southeastern coastal plain." (Palumbo, 2009). Yaupon holly tea is delicious, caffeinated, and anti-oxidant rich. Like tea and coffee, it is perfectly safe when brewed appropriately and consumed in moderation.

You can learn how to prepare this refreshing tea in our Yaupon Holly Tea tutorial. As always, practice extreme cautions when picking and consuming wild plants and fungi. It can be hard to positively identify yaupon holly. You might end up drinking something else!