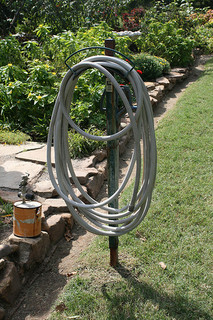 Whether you water with a hose, bucket, drip irrigation system, or sprinkler, regular irrigation is the edible gardener's most important chore. There's no "right" frequency to water; check on your plants every day or two and irrigate them when the top half-inch or inch of soil is dry or when plants begin to wilt.

Plants can be permitted to curl some leaves and wilt a little—it won't hurt them—but you should prevent severe water stress. Without periodic rains or irrigation, your plants will stop producing fruit and will drop any fruit they have already produced. Remember, most Florida soils drain easily and don't retain water. Adding organic matter to the soil will help the soil retain moisture, conserving you water and saving you effort.

Too much water also has ill effects. Plants should always be allowed to dry out between waterings. Soggy roots quickly begin to rot, causing plants to decline. Overwatering can cause fruit to explode, and can dilute its flavor.

How to water your plants should be a major part of early garden planning. Most people site their gardens near a faucet or hose to facilitate easy watering. But if you are going to use an irrigation system for convenience or because your garden site is far from the nearest water source, install it before planting so that you don't disturb roots.

Water may be drawn from lakes, wells, or municipal systems. Most gardeners don't need to worry about water quality. Unless you live on the coast or in an area where saltwater intrusion into the aquifer is a problem, your plants should thrive as long as they are irrigated regularly. If you suspect your water source of being contaminated with salt, have a sample tested by your county Extension office.

To handwater, you can use a watering can, pail, or hose. Handwatering can be an effective and efficient way to irrigate edible gardens, as long as you make sure to water the soil to a depth of several inches. Watering less will encourage your plants to develop shallow root systems and a dependency on frequent waterings, making them much less drought-tolerant. Handwatering is especially useful for container gardens as it's easy to see when the pots or planters are filled with water. You always want to water container plantings until moisture runs out of the drainage holes in the bottom, and you can tell whether they need water by sticking a finger in the soil up to the first joint. Dry soil indicates it's time to water. Containers sometimes need daily watering during the hot months, but a thorough soaking every few days will probably suffice during cooler months.

Overhead sprinklers are inexpensive and easy to install, but are the least efficient way to water your garden. Much of the water evaporates before being used by the plants, and overhead irrigation can also encourage disease. Hose-end sprinklers screw into the end of the hose and have to be moved by hand to cover more area. Impact sprinklers spray out a fan-shaped curtain of water, and the arm tips back and forth to cover a large area. Gear-driven sprinklers have pop-up nozzles that rotate in an adjustable arc, and spray heads also pop up, typically with a fixed pattern. Position sprinkler heads carefully, and adjust the flow so that foliage and flowers are not damaged with a forceful stream.

Soaker hoses are perforated hoses that soak the ground. The water sprays out in fine streams from slits or holes in the hose, usually moistening the plant's foliage, flower, and fruit as well as the soil. They can help conserve water, because they're placed where water is needed and their proximity to the soil means that less water is lost to evaporation than in overhead irrigation. Some experts recommend that they only be used to help new plantings get established.

Again, in general, it's best to water when the top half-inch to inch of soil begins to dry. Check your plants frequently for dropping leaves and other signs of distress. Thick-leaved plants like cabbage, collards, and broccoli won't dry out as fast as plants with large, thin leaves such as squash, cucumbers, and pumpkins. Young plants and vegetables with root problems may need frequent watering.

Water enough to thoroughly wet the soil and root zone, but never let your irrigation system run indefinitely. Not only will you waste water, but you can also encourage disease. Soil and foliage need time to dry, so the best time to water is early in the morning, preferably between 4 and 6 a.m.

In sandy soil, a half-inch of water will moisten down to about six inches deep, which should be sufficient. In soils with more organic or clay content, and in gardens with a thick layer of mulch, you made need to apply up to an inch of water to wet the same depth. Of course, these soils will also hold moisture longer than sandy soil, meaning you can water less often.

Gardeners on the coast and some inland gardeners should be concerned with salt levels in their water. Water with salt levels above 1,000 parts per million will kill many plants, including beans, cucumbers, lettuce, and tomatoes. If your well is salty, try to use fresh water from another source (your city's water supply, for example) to supplement irrigation. You can also plant salt-tolerant vegetables.