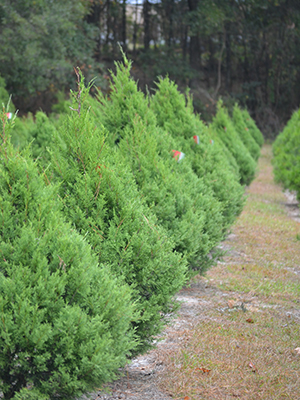 A row of red cedars at the Unicorn Hill tree farm in Gainesville, FL.

Red cedar (Juniperus virginiana) is a lovely Florida native that adds year-round greenery and texture to your landscape. With attractive, dense foliage, it's often used as a wind break or a screen. It also has a high salt tolerance, making it great for coastal areas. Its pleasing form makes red cedar also popular as a cut or living Christmas tree; it's one of several evergreen species grown on Florida Christmas tree farms. Red cedar goes by many common names, including southern red cedar, eastern red cedar, and even pencil cedar (more on that later).

Some southeastern botanists make a distinction between Juniperus virginiana var. virginiana—sometimes called eastern red cedar—and Juniperus virginiana var. silicicola—sometimes called southern red cedar—stating that there is considerable variability in the characteristics used to differentiate plant varieties. But in 1986, a botanist named Robert Adams did detailed comparisons of morphology and chemistry, all of which failed to show any clear distinction between the two. For this reason, the Atlas of Florida Plants (a comprehensive database of plants in the state) does not recognize the varietal distinctions, and treats them both as a single entity, Juniperus virginiana.

Red cedar trees were harvested for pencil manufacturing for many years. In fact, this industry was greatly important in Cedar Key and North Florida during the late 1800s and early 1900s. The pencil manufacturing industry in Cedar Key flourished until, as was sadly common during that era, local resources were depleted. This, coupled with destruction of the mills by a hurricane in 1896, brought an end to the red cedar pencil industry in the area. 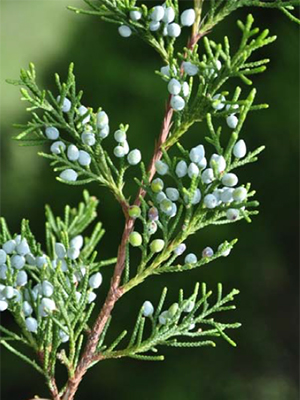 A better look at the blue "berries" of a female red cedar. Photograph courtesy of Stephen H. Brown, UF/IFAS.

Red cedar is a member of the cypress family, Cupressaceae, which also includes sequoias and redwoods. Despite its common name, red cedar is actually a juniper (its Latin name hints to that).

It has fine leaves that are pale green and prickly when young; as the tree ages, the foliage darkens and flattens out, scale-like. The bark is reddish-brown and fibrous, often peeling off. The female red cedar has showy purple-blue fruits which attract birds. And like many evergreen trees, red cedar plays an important role as nesting and roosting cover for birds and other wildlife in its dense foliage.

Moderate to fast growing, red cedar can reach a mature height of 25 to 45 feet tall and spread 20 to 30 feet wide. Growth will vary between cultivars, with some growing into a pyramidal form, others a more oval shape, and still other cultivars achieving a columnar form.

Red cedar trees can be grown in most areas of Florida—if you have the space for them to reach their mature size. It grows best in full sun but can tolerate partial shade. This tree is highly tolerant of both drought and salt spray, making it an excellent choice for a variety of landscapes. Red cedar does well in most soils, including clays, but will not grow in over-irrigated or continuously moist areas.

Red cedar is an alternate host for cedar apple rust, which is a major disease of apples, hawthorns, and pears. It's not recommended that you plant red cedar in your landscape if you are already cultivating any of these fruit trees.

After planting your red cedar, keep it watered until it's well established. After that, the tree can essentially be ignored in terms of maintenance. It won't even require much pruning, unless you want to maintain a specific form, like that of a Christmas tree.