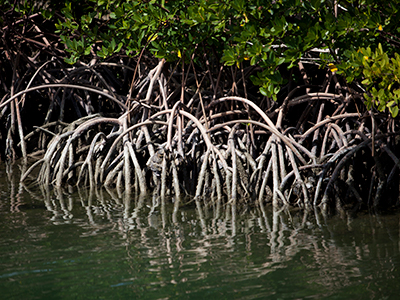 Mangrove trees are an important part of Florida's diverse ecosystem and are integral to the coastal intertidal zones where they grow.

Mangrove forests in the tropics and subtropics are identifiable by their dense tangle of prop roots that help the trees handle the rise and fall of the tides. This dense tangle of roots acts as a net, holding and stabilizing shorelines. In addition, these roots provide shelter to the majority of all recreationally and commercially important fish species in Florida.

Their unique structure makes them able to withstand major storm forces like those from hurricanes. Mangroves are a keystone species providing essential services that act as the base for the entire estuarine community. Occasionally referred to as the "kidneys of the coast," mangroves are magnificent filters and maintain necessary water clarity for offshore corals and near shore seagrasses.

In fact, mangroves are so essential to the coastal ecosystem that laws have been passed to protect these trees. The 1996 Mangrove Trimming and Preservation Act prohibits trimming or alteration of mangroves on publicly owned lands and sets specific limits for trimming or removal of mangroves on private property. Depending on the site conditions, a permit may be needed to trim or remove dead or living parts of a mangrove tree. Contacting a certified mangrove trimmer will help you adhere to the law, or you can contact the Florida Department of Environmental Protection (FLDEP). Some counties and municipalities have received delegation of the state rule, allowing them to administer the rule on behalf of the FLDEP. Check this list to determine if your area is under local delegation. 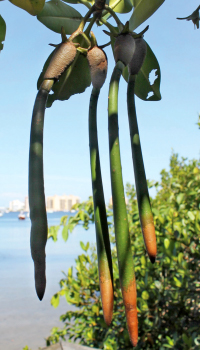 Fruit of the red mangrove. Photo: UF/IFAS, all rights reserved.

Out of the approximately seventy species of mangroves that are classified in the world, three live in Florida. These three species are from distinct genera, since "mangrove" is often a term used to describe both an ecosystem and a type of plant. The three native mangrove trees found in Florida are black mangrove, white mangrove, and red mangrove.

These are the mangroves people often envision when they think of mangroves. They have prop roots and long, dangling, pencil-like propagules. They are generally found in standing water in zones 10 and 11. These mangroves have a lower soil salt tolerance than other mangroves and therefore tend to inhabit lower portions of regularly flooded intertidal zones. Red mangroves are occasionally called the "walking trees" due to their horizontal growth habit. These trees reach between 20 and 75 feet tall. The national champion red mangrove is in Lee County Florida, documented at 64 feet tall. 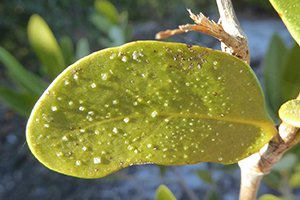 Salt crystals on the leaf of a black mangrove.
Photo by Mike Fitz, some rights reserved.

These trees grow in zones 8b to 11b and reach heights of 40 to 60 feet tall. This evergreen tree generally grows further inland than reds, where the roots are still inundated during high tide.

Black mangroves have a higher salt tolerance than the other two species, and have glands on their leaf surfaces that excrete excess salt. Historically, indigenous people gathered the leaves for this salt, and the wood was an important fuel source for smoking fish.

The bark was also used in the tanning process as a black dye for animal skins. Black mangrove flowers are a popular nectar source for honey bees, leading to the creation of "mangrove honey."

More of an upland species, white mangroves are generally found further inland along the coast where it is irregularly flooded in the intertidal zone. These trees grow in zones 9a to 11b and reach 30 to 40 feet tall. White mangrove trees produce hard, strong wood that has historically been used for lumber. Most commonly these trees were used as a fuel source and for tanning leather. 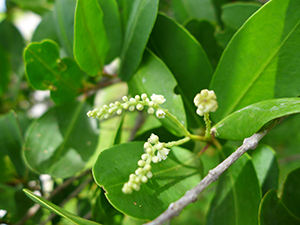 Black, red, and white mangroves are viviparous, meaning their seeds germinate while still on the tree and begin to develop before dropping off.

Florida's Ten Thousand Islands is one of the largest mangrove swamps in the world.

Mangrove conservation laws were put into place because mangrove swamps were greatly reduced by land development. Remember, it is against the law to remove a mangrove tree.

Mangroves are home to a massive array of wildlife — more than 200 species of fish, over 150 species of birds, two dozen reptile and amphibian species, and more than a dozen mammal species.