Walter's Viburnum and Other Viburnum Species 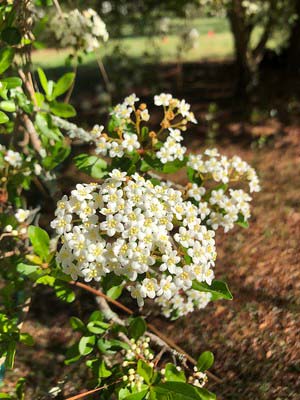 Walter’s viburnum makes a great addition to the Florida landscape as a small tree or large shrub. This native features a mass of small white flowers in the spring that attract butterflies, and its fall fruit attract birds and other wildlife. But it's not the only viburnam species that can be planted in Florida.

The food and habitat that viburnum species provide supports wildlife throughout the year. Pollinators are attracted to the nectar, pollen, and scent of the flower clusters. Moths and butterflies are attracted to species with flowers that feature deeper nectar tubes. Viburnum species with shallow nectar tubes and musky scents attract flies and bees. In fall, birds and other wildlife feast on clusters of ripe berries.

Walter's viburnum (Viburnum obovatum) is native to the southeastern United States. It is evergreen in USDA Hardiness Zones 7 through 10. Depending on pruning, this plant can trained into either a large shrub or a small tree. Walter's viburnum can reach up to 20 feet tall, but it's often pruned into a shorter screen or hedge.

Walter's viburnum has fine, dense foliage that add texture to the landscape. Its branches provide a nesting site for songbirds such as cardinals, and small white flowers attract butterflies in the spring. This species is a host plant for spring azure butterfly larvae (Celastrina ladon).

Walter's viburnum is available in dwarf forms like 'Densa'. Other compact cultivars include 'Mrs. Schiller's Delight', 'Walters' Whorled Class', and 'Withlacoochee'. In Florida these are available through native nurseries. 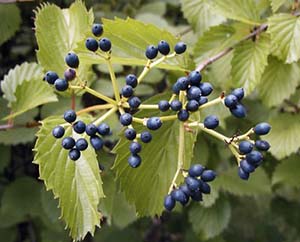 Arrowwood viburnum (V. dentatum) is native to the southern United States. Unlike other viburnum species, it is deciduous and grows only as a shrub. It reaches 12 feet tall at its highest, making it a good choice for small spaces. V. dentatum is typically found along riverbanks, fertile lands, and swamp borders. It grows in zones 8A through 9B. Like Walter's viburnum it produces white flowers, but the fruits are a more vibrant blue. The cultivar 'Blue Muffin' is particularly stunning.

Sweet viburnum (V. odoratissimum) is native to Asia, but is considered well adapted to Florida and non-invasive. It grows in zones 8B through 10A. It grows as a large shrub or small tree and can reach 30 feet tall if not pruned. As a mature tree this species forms a wide canopy and can appear top heavy.

Sweet viburnum has large, leathery, dark green leaves. The foliage is evergreen and small white flowers produce a fragrant scent in the spring. Red berries emerge in the fall and turn black as they ripen. 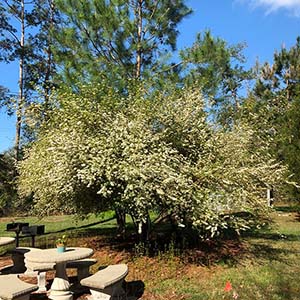 Viburnums are suitable for mass plantings in residential or commercial landscapes. Because their height is limited, viburnums are a good choice for street-side plantings and under powerlines. Viburnums can also grow in a garden or as a patio tree. More compact forms are a Florida-Friendly alternative to boxwood hedges.

Walter's viburnum and sweet viburnum tolerate a variety of soil types, making them particularly drought-tolerant plants. Arrowhead viburnum should be grown on moist but well-drained soils. None of these plants are tolerant of salt.

Root suckers are small branches that emerge from the roots near the base of a plant. If the suckers are not regularly managed some species of viburnum will form a thicket. Species such as Walter's viburnum and sweet viburnum may require regular pruning to maintain a strong structure. To avoid a thicket of viburnum, remove the root suckers yearly.

Sweet viburnums need considerable maintenance because of their fast growth rate. They can be pruned into a single- or multi-trunked specimen or a hedge. Regular pruning is necessary to maintain the desired size and shape. Grown as a specimen plant in the open, the branches form a well-kept canopy.

Viburnums experience some pest issues, but attacks are not usually serious. Common pests include viburnum aphids, scale insects, thrips, mites, white-fly, bagworms, and sooty mold. Insects can be removed with a blast from the garden hose. Horticultural oil can be used on scale infestation.

Leafspot is a disease that creates water-soaked spots on leaves and young stems. The spots shrink and turn brown, standing out against the dark green leaf color. Removing the infected leaves will help control the spread of the disease. Downy and powdery mildew cause white powdery growth on leaves but are not often fatal.

For more information about viburnums, contact your county Extension office. 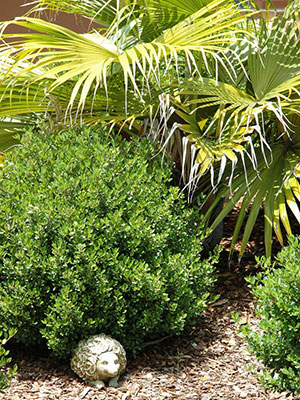 A dwarf variety of Walter's viburnum under a palm.