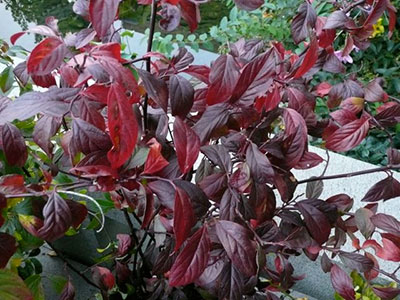 Sweetspire 'Henry's Garnet' is an improved version of a Florida native that's know for its sweet-smelling blooms in spring and its colorful fall foliage.

Sweetspire 'Henry's Garnet' (Itea virginica) is a compact shrub that can make a lovely addition to any Florida garden. Because of its beauty and performance, it was named a Florida Garden Select plant in 2000 by the Florida Nursery Growers and Landscape Association (FNGLA).

'Henry's Garnet' features graceful, arching branches that can reach three to four feet tall and four to six feet wide. It has lovely color year-round, sporting glossy leaves that are burgundy-green, especially on the new growth. In the fall, the foliage typically turns to an even deeper shade of burgundy.

The plant's stems also add color to the landscape, starting out purplish-red and then moving through shades of red, brown, and green as they mature.

Sweetspire 'Henry's Garnet' looks wonderful when planted in groups, though it can also make a nice specimen plant in a mixed border. It's a Florida-Friendly alternative to gardeners looking to replace invasive Chinese privet (Ligustrum sinense).

It is hardy to USDA zones 6-10 and is primarily deciduous, though it may be semi-evergreen in South Florida.

One key feature of Sweetspire 'Henry's Garnet' is that it's highly adaptable. It can be planted in dry or wet conditions and in full sun or partial shade, though it flowers best if exposed to full sun.

The native version of sweetspire is known to spread by underground by runners, so if you plant the native form, be sure to leave it plenty of room.

After planting, water the shrub on a regular basis until it is established. After that, it should be able to tolerate both drought and flooding.

Prune the plant only as needed to maintain an attractive shape. Like azaleas, sweetspire blooms on the previous season's growth, so prune shortly after flowering to prevent trimming off the next year's flower buds.

For more information on sweetspire, contact your county Extension office.