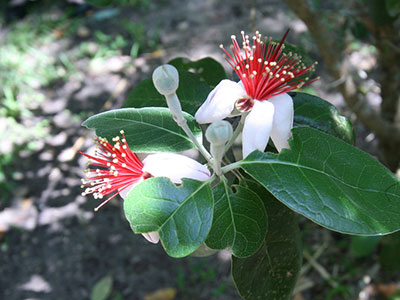 If gardening were an Olympic sport, pineapple guava might be a contender for best all-around shrub. This attractive evergreen can be grown throughout Florida and is a favorite for its attractive silvery foliage, unusual flowers, and edible fruits.

Pineapple guava was named a Florida Garden Select plant in 2009 by the Florida Nursery Growers and Landscape Association. It can be grown anywhere in Florida and is especially suited for coastal area gardens because it tolerates salt spray. The plant is also commonly known as feijoa.

Pineapple guava can easily be pruned to form a dense hedge or trained into a small tree with a single trunk. Left unpruned, it can reach up to 15 feet tall and 15 feet wide. For added interest, try training it as an espalier. The evergreen, egg-shaped leaves are 2 to 3 inches long and have silvery, slightly fuzzy undersides that often give the entire plant a slight bluish cast.

The flowers appear from April through May and are 1 to 2 inches across. The fleshy petals are white or a soft pink and the stamens are a striking burgundy. An extra perk is that the flowers are edible and can be added to salads and other dishes.

Between August and October, the egg-shaped fruits begin to mature and ripen, starting out gray-green and then turning a reddish-brown. They fall off the plant when they're ready to eat, though they can be picked earlier and left to ripen on a kitchen counter. Some people liken the flavor of the fruits to that of guava, while others say that it's closer to a minty pineapple. Eat them fresh by cutting them in half and scooping out the pulp, or turn them into a delicious jelly.

Pineapple guava is now known scientifically as Acca sellowiana, though some sources still refer to it as Feijoa sellowiana.

Pineapple guava will grow in full sun to part shade and in a variety of soil types, though it prefers a slightly acidic soil. It does well with minimal pruning and care and typically won't require much irrigation beyond normal rainfall. It has no major pest or disease problems.

Gardeners who want to enjoy fruit may wish to purchase one of the named self-fruiting varieties like ‘Coolidge' that have shown to perform well in Florida.  Pineapple guava can be grown from seed, but seedlings are slow growing and may not produce high quality fruit.

Also note that fruit set may be low in extreme southern Florida, since the plants fruit better when they're exposed to cold temperatures for a certain period of time each winter. Extreme heat in summer may also cause them to drop fruit prematurely.