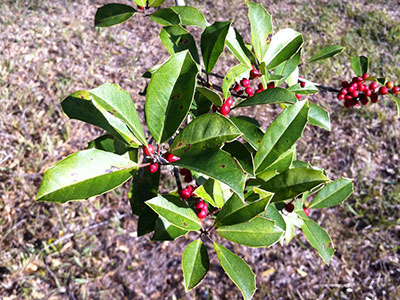 Many people like to use holly sprigs in their holiday decorating. Planting a 'Nellie R. Stevens' holly can provide plenty of berries each winter and will give any Florida landscape an evergreen plant that looks good year-round.

Since the 1950s, gardeners have treasured 'Nellie R. Stevens' holly for its glossy, evergreen foliage and tidy, pyramidal shape. It's a great shrub or small tree for any Southern garden, since it's one of the few hollies that will thrive in hot and humid climates. It can reach 30 or 40 feet tall but usually ranges between 15 and 25 feet.

Known scientifically as Ilex x 'Nellie R. Stevens', the plant is the result of a cross between English holly (I. aquifolium) and Chinese holly (I. cornuta). It works well as a backdrop in a mixed border or planted in groups to form a screen or border.

The leaves have a classic holly look—glossy and dark green with pointed teeth. The female plants are typically quite fruitful, and the bright red berries that they produce each winter provide a great food source for birds like cedar waxwings, mockingbirds, robins, and woodpeckers.

For best results, plant 'Nellie R. Stevens' holly in an acidic soil in full sun, though it can tolerate other soil types or partial shade. Water the plant regularly for a few months to help it get established.

'Nellie R. Stevens' holly requires little maintenance after it has gotten established. It's quite drought tolerant and doesn't even need pruning, since it naturally grows into an attractive pyramidal form.

It has good resistance to most pests and diseases. However, it does occasionally suffer from scale infestations and can be troubled by a fungal disease called Sphaeropsis tumefaciens, which disfigures branches and causes a "witches' broom" effect. Removing affected branches may help curb the spread of the fungus to other branches, but there is no real control for the disease.