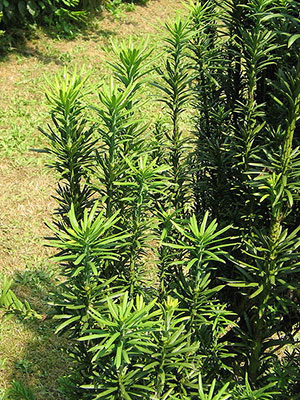 Deep shade can be a challenge for gardeners, but Japanese plum yew is a lush evergreen plant that performs well even in the shadiest spots.

Japanese plum yew (Cephalotaxus harringtonia) has flat, needle-like leaves that are a rich dark green and make a nice backdrop for other garden plants. It's also evergreen, so it provides good year-round interest. Female plants may produce fleshy green fruits if they receive adequate pollination from nearby male plants.

Japanese plum yew can be a shrub or small tree, depending on the exact cultivar. Some cultivars form thickets, so consider your site and select your plant carefully.

‘Fastigiata' grows to eight feet and has a columnar form. In shady areas, it can make a decent substitute for ‘Sky Pencil' Japanese holly.

‘Prostrata' has a spreading form and grows just a few feet high and three to six feet wide, making it a lovely ground cover or foundation planting. The Florida Nursery Growers and Landscape Association named this cultivar a Florda Garden Select plant for the year 2011.

Plum yews can be slow growers, but they're worth the wait. They're an especially good choice for gardens that are frequented by deer, since deer won't usually eat them.

Japanese plum yews prefer a well-drained, slightly acid soil. When planting this or any shrub, dig a hole that's at least one and a half times as wide as the root ball but one inch shallower. Place the root ball in the hole and fill it in with soil, but don't put any soil on top of the root ball.

Water the plant on a regular schedule until it's established. After that it will be fairly drought tolerant, though it will perform best if it's given some water during dry spells. Prune it on an as-needed basis to maintain an attractive shape.

New plants can be grown from seed or cuttings, but the process can be quite time consuming. Because of this, it’s typically easier to buy commercially produced plants from a nursery.