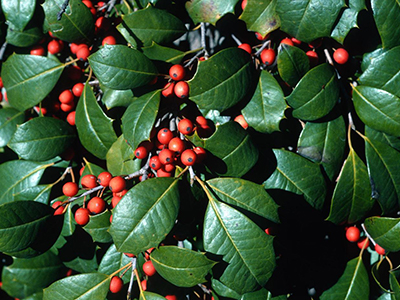 Hollies come in many forms, from large trees to dwarf shrubs. Some make excellent hedges, while others shine alone as accent plants.

There are three common hollies native to Florida: American, yaupon, and dahoon, as well as a hybrid of American and dahoon called ‘East Palatka’ holly. Holly plants have many different leaf shapes and vary in size. The growth forms also can vary from upright to weeping types. All four produce the shiny green leaves and red berries we associate with "Christmas holly."

Holly trees are dioecious, meaning there are both male and female trees. Only the female plants produce berries, which are also a source of food for wildlife.

American holly (Ilex opaca) is found in natural areas and can be used as a landscape tree. This broad-leafed evergreen is beautifully shaped with a symmetrical, dense, wide pyramidal form. The spiny, shiny evergreen leaves are accented with clusters of red berries which persist through fall and winter. The white bark of these trees is of added interest.

Yaupon holly (Ilex vomitoria) is native to the South. There are several cultivars offering a variety of forms — from attractive dwarf types that resemble boxwood to large upright or weeping formed trees. Large-growing yaupon hollies can grow to be between 15 and 25 feet tall and will have a spread of about the same width. In the landscape, these evergreen beauties take about ten years to develop the distinctive vase shape they are known for. 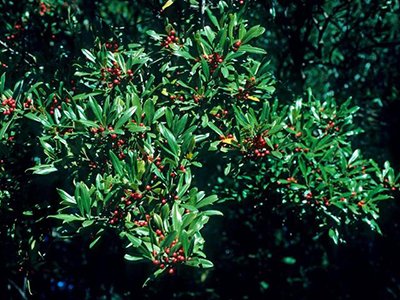 Dahoon holly (Ilex cassine) has a spread of 8 to 12 feet, and is able to reach heights of 40 feet tall, although it is more often seen at heights between 20 and 30 feet tall. The dark evergreen leaves are 2 to 3 inches long and smooth, supple, and shiny, with a few serrations near the tip. These trees are also known for producing a large number of berries beloved by wildlife.

East Palatka holly (Ilex x attenuata ‘East Palatka’) was discovered growing near East Palatka, Florida in 1927. This holly is a hybrid between I. cassine and I. opaca.

It has broad, dull green, rounded leaves that have a spine at the tip and a few spines along the blade edges. The tree grows to be 30 to 45 feet tall and creates a moderately tight, pyramidal shape. Female holly plants are heavily loaded with bright red berries in fall and winter. They have a uniform appearance which is one of the things that makes them popular additions the landscape.

‘East Palatka’ was found in the wild, but it is one of many cultivated hybrids of American holly and dahoon holly. ‘Savannah’, ‘Fosteri’, are some of the other commercial hybrids.

Hollies will tolerate a wide range of light and soil conditions. They require minimal pruning, except to train the plants for special purposes or to remove diseased or dead branches. A great feature of these trees is that they have been found to be wind-resistant during a hurricane.

Once your holly is happily established in your yard, use its attractive foliage in indoor arrangements or enjoy watching birds feed on the berries outside. Be aware that male and female flowers appear on separate trees. You will need a male tree within your neighborhood if you want to ensure berry production on a female tree in your landscape. 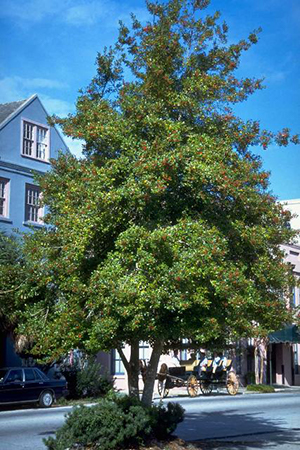