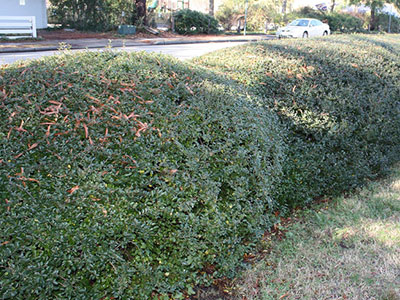 Hollies are well known for their evergreen leaves and bright red winter fruits. They come in many forms, from large trees to dwarf shrubs, and are drought tolerant once established.

For smaller spaces and even containers, consider a dwarf holly. These smaller shrubs can also be used as hedges and foundation plantings, and there is a dwarf holly for all areas of Florida.

Hollies are dioecious, meaning there are separate male and female plants. So if you want a shrub that produces berries keep in mind that only the female plants produce them. (Here's a fun fact: holly fruits are not in fact berries, they are actually drupes. But they're commonly called "berries," so we'll stick with tradition.)

With glossy green foliage and red berries, ‘Burfordii Nana’ grows well in North and Central Florida. ‘Burfordii Nana’ is a dense and compact shrub with a mature height and spread of 5 to 8 feet.

‘Rotunda’ and ‘Carissa’ take up very little space with a height and spread of 3 to 5 feet. Both are adapted to North and Central Florida and form dense shrubs with stiff, dark green leaves that have sharp spines. These and several other cultivars mentioned here are sterile, and won't produce berries.

‘Bordeaux’ is a dwarf cultivar of the native yaupon holly (Ilex vomitoria). It forms a dense, fine-textured shrub with leaves that emerge maroon. It also does not produce berries. ‘Bordeaux’ is quite compact with a height of 2 to 3 feet and a spread of 3 to 5 feet.

‘Nana’ is another dwarf cultivar of yaupon holly that has a dense, rounded form and fine texture. ‘Nana’ rarely produces berries. The small dark green leaves have a yellow tinge when they emerge. ‘Nana’ has a mature height of 3 to 5 feet and a spread of 3 to 6 feet. 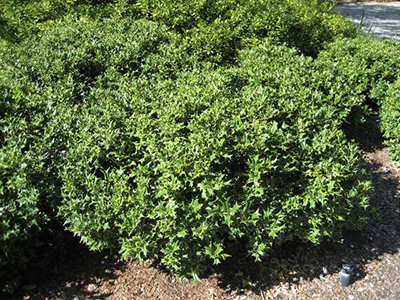 Another dwarf cultivar of yaupon, ‘Schillings Dwarf’, grows to a height of 4 to 7 feet and spreads 6 to 10 feet. ‘Schillings Dwarf’ has a dense, rounded form and a fine texture. This holly is a male cultivar and doesn’t produce berries. It has small, dark green leaves and reddish new growth. Both ‘Nana’ and ‘Schillings Dwarf’ grow throughout the state.

‘Taylor’s Rudolph’ has a mature height of 3 to 4 feet and spreads 4 to 5 feet. Small green leaves emerge with a purplish tinge. Mature shrubs are rounded and dense with fine texture. This cultivar of native holly produces red berries and grows throughout the state.

Down the holly-breeding rabbit hole

Some gardeners might wonder if these cultivars of native hollies are also considered native plants. So we consulted Marc Frank, an Extension botanist with the Florida Museum of Natural History. He gave us some wonderful background on these cultivars thanks to his expertise and the book Hollies: The Genus Ilex by Fred C. Galle, 1998 Timber Press. He doesn't consider them native, but simply cultivars of native plants.

‘Taylor’s Rudolph’ is a seedling of ‘Gray’s Greenleaf’ and arose in a nursery. ‘Nana’ originated as seedlings collected by Sam Stokes (who had a nursery in Forest Hill, Louisiana) and Tom Dodd Jr. (whose nursery is in Semmes, Alabama), and was introduced by Stokes. As you might have guessed, ‘Stokes Dwarf’ was also discovered at the Sam Stokes Nursery. ‘Bordeaux’ is a sport of ‘Stokes Dwarf’ discovered by James Pittman at Flowerwood Nursery in Loxley, Alabama in 1988. The term "sport" refers to a genetic mutation in a plant; often these mutations are selected and further cultivated.

Additionally, ‘Bordeaux’ is the trademark (marketing) name for the patented cultivar ‘Condeaux’, which was selected for its purplish-red new foliage. It was selected from a male plant and is reproduced asexually by vegetative propagation, so true ‘Bordeaux’ never produces fruit.

Hollies will tolerate a wide range of light and soil conditions. They require minimal pruning, except for occasional shaping, special training, or to remove diseased or dead branches. Did you know that while not as common, deciduous hollies do exist? One example is Ilex decidua. Another great feature of these shrubs is that they have been found to be wind-resistant during a hurricane.

Commonly called either stem gall or witches' broom, Sphaeropsis tumefaciens is a usually fatal disease of hollies in central and south Florida. Stem galls form on twigs and branches, causing the stems to enlarge and initiate an abnormal number of shoots, producing a broom effect. The disease is spread by infected pruning tools, as well as by wind and rain.

Once your holly is happily established in your yard, use its attractive foliage in indoor arrangements or enjoy watching birds feed on the berries outside. Be aware that male and female flowers appear on separate shrubs. You will need a male shrub within your neighborhood if you want to ensure berry production on a female shrub in your landscape. 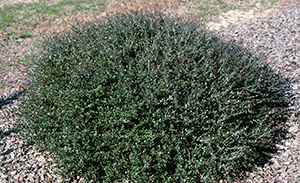