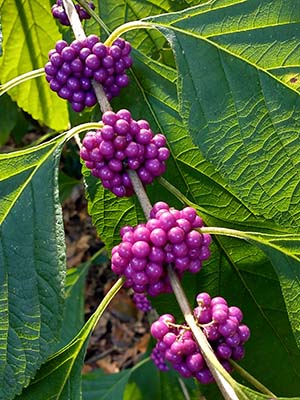 If you're looking for a dazzling plant to attract birds to your yard, look no further than beautyberry. This Florida native is scientifically known as Callicarpa americana, and its bright purple fruits are some of the most striking around.

Beautyberry, also called American mulberry, is native to flatwoods and hammocks but thanks to birds it has spread near and far.

Beautyberry is a small, sprawling shrub (3 to 8 feet tall; 4 to 8 feet wide) that works well in borders or as a specimen plant. The branches form long arches that bend toward the ground. Pruning will keep the plant more compact, but be sure to prune before the plant flowers. The deciduous leaves are light green, coarse, and fuzzy.

Small, pale lavender-pink flowers appear along the branches from spring to summer and then mature into jewel-like fruits by September. The showy clusters of shiny purple fruits are densely packed and encircle the woody stems. If not devoured first by birds, the fruits will persist for several weeks after the plant drops its leaves. There's also a variety of C. americana called ‘Lactea’ that has white, pearlescent fruit.

In addition to C. americana, several other species of beautyberry will grow well in Florida. Callicarpa japonica, a non-native plant, typically has purple fruit and grows 4 to 6 feet tall and wide; the cultivar ‘Leucocarpa’ has white fruit. Another Asian species, C. dichotoma, has smaller leaves and is more compact (3 to 5 feet) than C. americana and C. japonica. It also has a white-fruited cultivar, called ‘Albifructus’ or ‘Albescens’.

In terms of size, C. americana has the largest fruit (4-5 mm in diameter). The drupes of C. japonica are slightly smaller (2-3 mm in diameter), while those of C. dichotoma are much smaller (1-2 mm in diameter). Finding the non-native species for purchase may be difficult depending on your area.

You can plant beautyberry at any time during the year, and it will be drought-tolerant once established. Beautyberry prefers rich soils, but will also grow in poor, sandy soils. 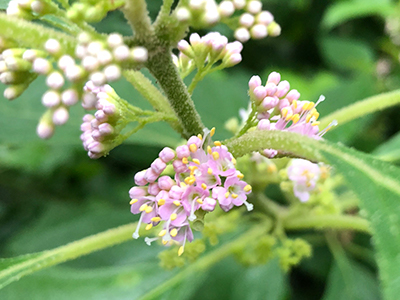 The small flowers of beautyberry are not as noticable as the fruit. UF/IFAS.