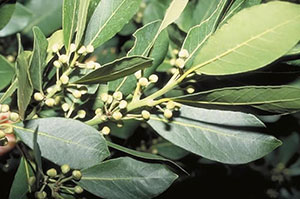 You may have used bay leaves before in your cooking, but did you know that you can grow your own?

Bay leaves come from a medium to large evergreen shrub known as bay laurel. The shrubs can reach 12 feet tall, though they tend to be slow growers.

The leathery leaves can be harvested and dried to be used later as a flavoring in cooking, though the leaves should not be eaten.

Bay laurel is also sometimes called sweet bay, but it shouldn't be confused with the magnolia tree that has the same common name.

Because bay laurel has a dense growth habit, it also makes an attractive landscape plant. Plant several in a row for a privacy hedge. During hard freezes, the plants should be protected.