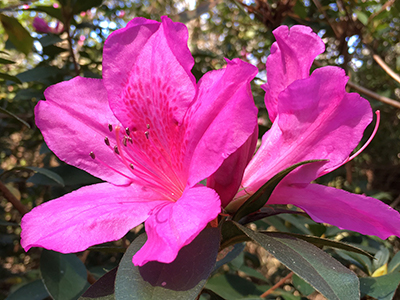 Azaleas are a classic Southern plant, both for the structure they provide year-round and for the magnificent floral displays they produce. Few other flowering shrubs put on such a spectacular show—some azaleas produce so many flowers at once that you can hardly see the leaves!

These lovely plants are best suited for North and Central Florida gardens and come in a number of shapes and sizes that can work within any garden. But South Florida gardeners need not feel left out—certain azalea relatives work great in tropical climates.

Because evergreen azaleas hold their leaves year-round, they make great backdrop plants for seasonal flower beds. And of course in the spring, they put on their own show with flowers ranging in color from white, to pink, to red, depending on the cultivar.

One widely planted evergreen cultivar is ‘George Lindley Tabor’, a variety that produces countless soft pink flowers each spring and grows to about 10 feet tall and 8 feet wide. ‘George Tabor’ is classified as a Southern Indica hybrid, a type favored by gardeners for its vigor and tolerance of colder temperatures, typically down to 20°F without experiencing serious damage.

Satsuki hybrids are mid-sized azaleas, typically growing the about 5 or 6 feet high within 10 or 15 years. They come in a range of colors from white to pink, yellowish pink, red, reddish orange and purple, often with patterning on the petals. Popular cultivars include ‘Flame Creeper’ (orange-red flowers) and ‘Gumpo’ (white or pink flowers).

For smaller-scale plantings, Kurume hybrids can be a good choice, since they grow from 3 to 5 feet tall depending on the variety. Kurume hybrids produce pink, red, purple or white flowers that are smaller in size than those of the Southern Indica hybrids but no less plentiful.

Florida has just one native evergreen azalea — Chapman’s azalea or Chapman’s rhododendron (Rhododendron chapmanii). This wetlands plant is listed as a rare and endangered plant and is found only in Clay County and the central panhandle. 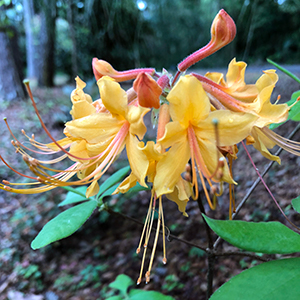 Most of the evergreen azaleas growing in Florida home landscapes are hybrids, and originally came from Asia. Native azaleas, also known as bush honeysuckle, have smaller flowers and are more delicate-looking, but they're also very fragrant, whereas non-natives have no fragrance.

Fragrant native azaleas bloom around the same time as other azaleas, in the spring, with colors just as spectacular, ranging from pink to peach to yellow. Many new cultivars are being developed with flowers that bloom at specific times.

The native azalea will slowly grow up to ten feet tall and will lose its leaves in the winter. Like all azaleas, it prefers a well-drained, acidic soil and filtered sunlight. It’s drought tolerant and needs little maintenance other than occasional pruning to maintain a healthy shape.

Natives like the Florida flame azalea (R. austrinum) are slowly becoming more popular. This drought-tolerant azalea produces flowers that may range in color from white or pale yellow to orange-red flowers. It will grow up to 8 or 10 feet tall and has a looser growth habit than many of the commonly grown non-native cultivars.

Another deciduous azalea that is native to Florida (R. canescens) goes by a number of common names including pink pinxter azalea, Piedmont azalea, and bush honeysuckle. This shrub can grow between 6 and 15 feet tall and produces fragrant, showy pink flowers in early spring, typically when the leaves first appear.

Cultivated varieties of deciduous azaleas include the Aromi hybrids, which were bred to perform well in the heat and humidity of the coastal South. These azaleas may reach up to 12 or 15 feet tall, depending on conditions. Popular selections include ‘Aromi Sunrise’ (orange-red buds opening to light orange with dark orange center), ‘Centerpiece’ (white flowers with yellow spots) and ‘Sunstruck’ (pale yellow buds opening to lemon yellow with darker patches).

Azaleas are widely planted in Florida because of the colorful flowers they produce from late February to early April. Pruning your azaleas can improve their blooming and help them develop into full, well-branched shrubs.

Always prune your plants in late spring or early summer, shortly after flowering, because azaleas set their flower buds for next year during the summer. Prune too late and chances increase that you will remove flower buds.

Older plants may have tall leggy branches that need to be removed. Doing so gradually over several years reduces shock to the plant.

Although azaleas aren’t well suited for South Florida, gardeners in the tropical regions of the state can try growing an azalea relative called the vireya rhododendron. These plants are technically a sub-species of the genus Rhododendron and are native to tropical areas in Southeast Asia.

Vireyas are small plants that can be grown in hanging baskets, much like orchids can, or they can be used in beds and borders in South Florida. The more than 300 species of vireya rhododendrons produce flowers in an array of shapes and colors, making them a great choice for the tropical landscape.

For more information on azaleas, contact your county Extension office.