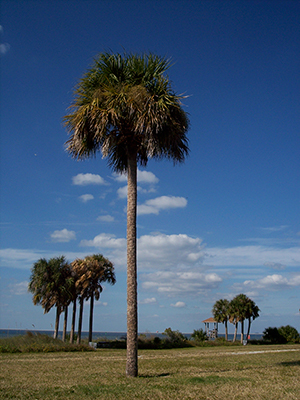 Nothing says Florida like a palm tree, so it's fitting that the state tree is sabal palm. Oddly enough though, the sabal palm is not a true tree, and as a palm, is more closely related to grasses.

The sabal palm, also known as the cabbage palm, was designated the state tree in 1953 and occurs on the Florida state seal. There were actually years of debate before the sabal palm was selected as the state tree. Other trees up for consideration were the royal palm, slash pine, and longleaf pine.

Early Floridians had a variety of uses for the sabal palm. The bud of the tree is edible and is known as "heart of palm" and swamp cabbage, the trunk and fronds were used to build shelter, and various fibrous parts were used to make cordage.

Cabbage palm (Sabal palmetto) is native to Florida, grows throughout the state, and continues to grow north along the coast to North Carolina. It happens to also be the state tree of South Carolina. Cabbage palm is found growing in pine woodlands, hammocks, and on river banks. These plants are fairly tolerant of salt spray on foliage but are intolerant of salt in the root zone.

Cabbage palms have curved, fan-shaped palm leaves with blades that are 3 to 4 feet long and petioles (leaf-stalks) that are 3 to 6 feet long. A full, round canopy forms atop a trunk that is 10 to 16 inches in diameter and grows to 40 feet tall. Branched inflorescences are produced in late spring and usually grow beyond the leaves, containing thousands of tiny, creamy-white, fragrant flowers that attract bees. Black fruits are produced in late summer and are consumed by wildlife. The immature leaves—sometimes called the "heart"—are edible and have a cabbage-like flavor.

Unfortunately, our state tree is under threat; it's susceptible to the newest disease to affect palms in Florida. Lethal Bronzing Disease (LBD) is fatal in palms once the symptoms are seen. However all hope is not lost, as preventative treatments can be made to protect palm trees in close proximity to palms that have been stricken. 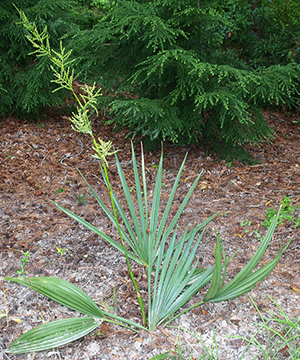 Often called dwarf palmetto, Sabal minor looks similar to S. palmetto but is much shorter. These plants have petioles without serrate margins and a solitary trunk that typically remains underground. Fruits are smaller on S. minor than the ones that form on S. palmetto. Also called swamp palmetto, these plants are seen growing in the understory in moist soils and wetlands. They will produce long flower spikes when the palm is less than 5 feet tall. Blooming at such a short height helps to differentiate Sabal minor from Sabal palmetto.

Known as scrub palmetto, Sabal etonia is endemic to Florida. These plants have smaller leaves and narrower segments than either S. palmetto or S. minor. Scrub palmetto is found in dry, sandy soils in scrub habitats. The trunk grows underground and mature plants don't grow to more than 3 to 6 feet tall. These plants are also sometimes called bush palmetto, bluestem, or corkscrew palmetto. 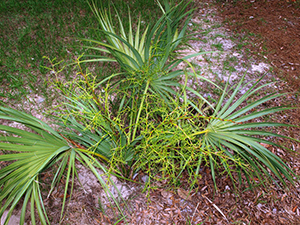