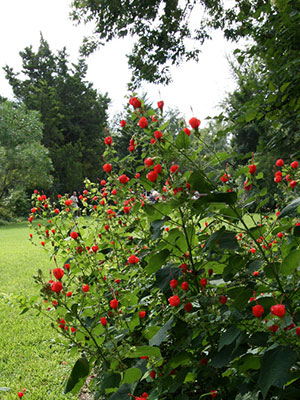 Turk's cap mallow is a Florida-Friendly shrub related to hibiscus.

Both Malvaviscus penduliflorus and Malvaviscus arboreus sport lovely flowers, usually red, that perpetually appear as if they're just about open fully, but never do.

The confusion between M. penduliflorus and M. arboreus indicates the trouble with common names: you're talking about one plant while your conversation companion may be thinking of a plant of another species or even genus. To add to the confusion, these shrubs go by additional common names such as sleepy mallow, sleeping hibiscus, wax mallow, or cardinal's hat.

Like hibiscus, these shrubs are members of the Malvaceae (mallow) family, which also includes okra and cotton. Either shrub is a great choice for Florida gardeners; they start blooming at the beginning of the summer and will keep going until the first frost. A staple of "old Florida" landscapes, they will add a cheerful pop of color at a time when many summer-flowering plants have fizzled out and cooler season plants haven't yet peaked. In both M. arboreus and M. penduliflorus, the most commonly found flower color is red, although pink and white cultivars exist for both species.

Both M. penduliflorus and M. arboreus can be grown throughout Florida, although neither is native to the state. Most commonly, when people are talking about Turk's cap mallow, they mean M. penduliflorus. Thought to originate from Central or Southern Mexico, this plant is distinguishable by its downward-pointing, pendant flowers that are about 2.5 inches long. Described by many as looking as if they are just about to open, the folded flowers are a favorite of hummingbirds.

When discussing M. arboreus, the name "wax mallow" is often used. Another hummingbird favorite, M. arboreus is native to Texas, Mexico, Central America, and northern South America, as well as parts of the West Indies. One easy-to-spot characteristic that sets apart M. arboreus is that flowers of this plant are upright to lax. Additionally, the flowers on M. arboreus measures 1.25 inches long, about half the length of those of M. penduliflorus. 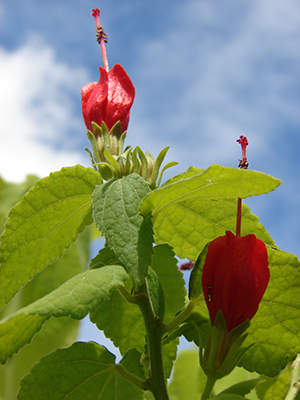 These shrubs can reach up to ten feet tall and spread ten feet wide, so be sure when selecting a site that you give them the space to grow. Hardy in zones 9-11, these shrubs can be also grown in zone 8; they will typically freeze to the ground, but return in spring.

These easy-care shrubs requires little maintenance and are drought tolerant once established. A spring-time pruning that removes half of the previous year's growth can help keep your plants healthy and looking great. In tropical areas, these plants do best in light shade, while in more northern areas, a site in full sun with afternoon shade is best.