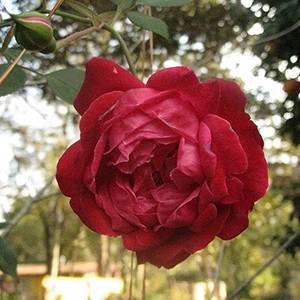 In 2008, University of Florida researchers launched a study of twelve shrub rose varieties in an effort to find low-maintenance plants that will perform well throughout Florida. From that study and further evaluations to date, they came up with a list of reliable, low-maintence, own-root roses.

Based on the Quincy UF study initiated in 2008 and further evaluations/observations to date:

Based on the Ft. Pierce UF Study initiated in 2008 (two years of evaluation):

Based on the Plant City UF study initiated in 2008 and further evaluations/observations to date:

In the trial, six modern varieties and six "heritage" (developed before 1867) varieties were studied, none of which had been grafted:

The roses were planted in January 2008 in three sites—Quincy (Panhandle), Plant City (Central Florida), and Ft. Pierce (South Florida)—and received minimal amounts of water and fertilizer throughout the test.

"Texas A&M has been evaluating roses under low-maintenance regimes for several years and they're promoting the best performers through their Earthkind™ Rose program," said Sydney Park Brown, UF/IFAS professor of horticulture. "Our intent is to evaluate some of the Earthkind™ roses as well as others that are considered to be low maintenance roses in our state."

The plants received drip irrigation daily (1/2 gallon per plant) for the first three weeks, every other day beginning February 11 and once a week thereafter. The soil at the test sites was amended with Black Kow composted cow manure and the plants received small applications of 5-9-12 Osmocote Plus in late March and late August. The plants received one major pruning in late winter, but were not dead-headed or trimmed. No pesticides were applied.

The roses were photographed each month and evaluated on their overall appearance and flowering. The appearance ratings included assessments of insect and disease damage as well as form and nutritional status. The intent of the flower ratings is to characterize season of bloom, length of bloom, floral impact and peak bloom by variety and location. Annual measurements were taken of each plant's size (height and two widths), plus each site will undergo soil and nematode analysis.

"It's still early in the research, but already we can see that not all of Earthkind™ roses we're trialing are performing well in Florida," said Brown.