Gingers spice up your yard much as they do in cooking; they are a diverse and beautiful group of plants frequently used in Florida landscapes. They're typically low-maintenance plants with attractive foliage and long-lasting, colorful blooms that make great cut flowers.

Plants in the Costus genus are often referred to as spiral gingers although the family (Costaceae) has been segregated from the true gingers (Zingiberaceae). Costus members have spirally arranged, one-sided leaves and terminal, cone-shaped inflorescences with colorful, closely overlapping bracts. Between the bracts single or paired flowers emerge. Unlike the true gingers, Costus species contain no aromatic oils and do not have the culinary value of true gingers. However, many cultures prize them for their medicinal properties.

Flower appearance can vary; some form a rigid tube that is usually red to yellow in color, or they can be more open and spreading in colors from white to pale pink. The different forms will bring different pollinators to your plants; birds like hummingbirds prefer the tubular red to orange flowers while bees will visit the more open white to pink petals.

These perennials reproduce through underground stems (rhizomes) and perform best in rich, moist soil although they are quite drought tolerant. Spiral gingers do well in part-sun, filtered sun, or shade. Cold winters in North and Central Florida will cause them to go dormant in the winter, but they return with the warm weather.

Unlike the true gingers, Costus can be propagated from rooted cuttings. Simply lay 8-inch stem pieces flat on the soil during the warm months of the year.

One of the most popular spiral gingers for Southern gardeners is known as red button ginger. This species, Costus woodsonii, grows to 3 to 4 feet tall. Red button ginger has leaves that are mid-green in color. From late winter to early spring, plants produce bright red bracts from which individual orange-yellow, edible flowers emerge.

Formerly known as Costus barbatus, this plant is commonly called red tower ginger and is a favorite in tropical gardens worldwide as a source of brilliant color. This perennial grows to six feet tall in zones 9 to 11. Red tower ginger thrives in full sun to part shade and blooms yellow with overlapping u-shaped red bracts in warm months. Red tower ginger also boasts very fuzzy leaves. These bloomers do well in water-wise gardens. 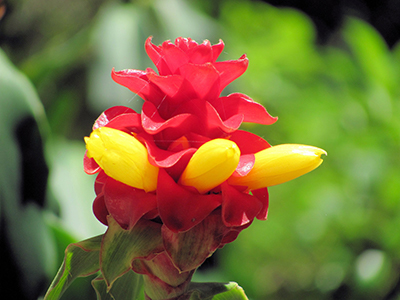 Widely grown, Malay ginger (or crepe ginger) is root-hardy throughout Florida. Admired for its 3-inch flowers that have ruffled white to pale pink flowers with a yellow center, the leaves are equally alluring — each is up to 12 inches long with undersides covered with fine short hairs. The cultivar ‘Variegatus’ (sometimes called variegated crepe ginger) has large, soft, variegated leaves borne on red stems emerging directly from the ground. The variegated cultivar is not as free-flowering as the non-variegated C. speciosus. Malay ginger can tolerate somewhat more sun (preferably early morning) than other species. But the foliage is liable to burn in day-long South Florida sun, especially when the soil begins to dry out. 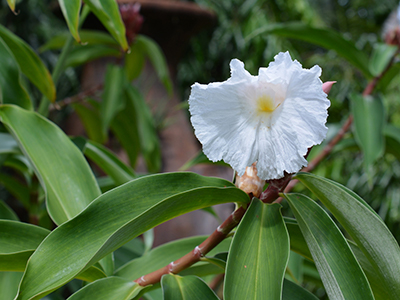