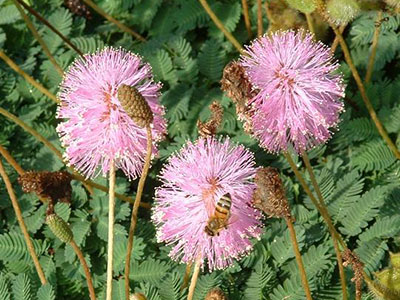 Powderpuff mimosa, also known as sunshine mimosa, is a native, low-growing Florida groundcover that is increasingly being used in home and commercial settings. Known scientifically as Mimosa strigillosa, it also attracts butterflies and serves as a host plant for butterfly larvae. From spring through fall, this versatile plant blooms non-stop with pink, ball-shaped flowers that look like small powderpuffs.

Gardeners love the puffy one-inch flowers that earned the plant its common name, as well as its interesting foliage. Powderpuff mimosa has attractive bright green, fern-like leaves that fold up when touched. Although the foliage looks fragile, it’s actually quite resilient and can withstand some light traffic.

Powderpuff mimosa is an effective ground cover because it spreads very quickly. As few as four or five pots can cover up to 300 square feet in a season. However, it’s not an overly aggressive plant and can be intermixed with turfgrass or other plants.

Once established, powderpuff mimosa has a fairly deep root system that can help it control erosion and that also makes it drought tolerant.

One drawback is that powderpuff mimosa isn’t evergreen, so gardeners need to be prepared for the leaves to disappear during the coolest months.

Powderpuff mimosa can be planted in full sun or partial shade. New plants can easily be started from cuttings, or you can purchase container grown plants. Water new plants regularly to get them established. Once established, they should be quite drought tolerant.

If powderpuff mimosa starts growing into unwanted areas, it can easily be kept in bounds with periodic pruning using a standard set of pruning shears. If desired, it can even be mown. Powderpuff mimosa has virtually no major insect or disease problems.