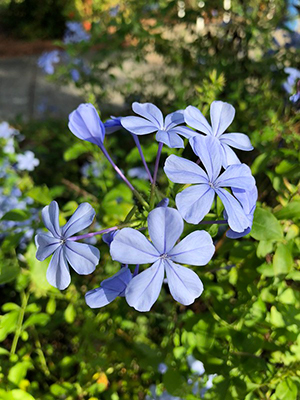 P. auriculata is the classic blue plumbago; it's non-native, but Florida-Friendly. Credit: UF/IFAS

Plumbago is an easy-to-care-for shrub that brings interest to many Florida landscapes. Its clusters of cool blue or white flowers are unmatched and make it a favorite among traditional garden selections.

Although the genus Plumbago contains a dozen or more species, two are most frequently found in Florida: Plumbago auriculata and Plumbago zeylanica (also called P. scandens).

Plumbago auriculata is the classic blue plumbago, native to South Africa. Though non-native, this species is considered a Florida-Friendly plant and labeled by the UF/IFAS Assessment as “low invasion risk.” It is sometimes called Cape plumbago, leadwort, or sky flower. The names plumbago and leadwort have been passed down through history from an ancient Roman naturalist, Pliny the Elder. Something about the ethereal bluish hue of the plant reminded him of lead; thus plumbago, Latin for “resembling lead.”

Plumbago zeylanica is our Florida-native white plumbago, found from USDA Hardiness zone 9B to 11. It is sometimes called doctorbush. While we can’t speak to any medicinal properties, this plant is a host for the larvae of the cassius blue butterfly (Leptotes cassius) and other lepidopterans. Most gardeners report minimal caterpillar damage, so you can install this host with confidence. 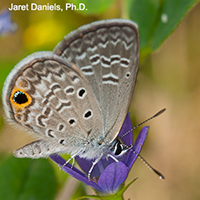 The two eyespots on this cassius blue are a brilliant irridescent blue. ©Jaret Daniels.

Both species of plumbago develop sprawling, mounded shapes. Pruning will keep them more compact but they look their best planted with room to grow. This makes foundation and mass plantings the installation of choice in most landscapes.

Plumbago foliage is bright green, of medium density, and remains evergreen in frost-free areas of the state. Stems are thin and somewhat vine-like, keeping its form delicate even in mass plantings. Evergreen foliage, cascading form, and persistent fruits give plumbago some winter interest. A freeze may cause die-back, but plants generally recover quickly once the weather warms up in the spring.

Plumbago’s phlox-like blue or white flowers attract butterflies and give off a pleasant fragrance. Gardeners in Central and South Florida will enjoy blooms year-round, unless hit by frost. In North Florida, plumbago usually blooms from spring through fall. 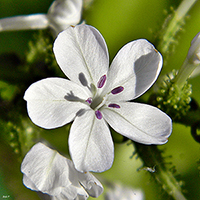 Plant plumbago anytime of the year. It generally looks its best when planted in full sun and well-drained soil. Both species require regular watering until established but are moderately drought tolerant afterwards.

Plumbago grows quickly but excess growth can be pruned off at any point throughout the year. Growth damaged by frost should be pruned off in spring.

Plumbago auriculata can be affected by tiny insects called chilli thrips, which cause the leaves to look curled and stunted. Cotton cushion scale and mites are occasionally a problem, too, but do not usually affect the long-term health of the plant. Plumbago has no major diseases of concern but alkaline (high pH) soil can result in mineral deficiencies and yellowing leaves.

For more on native and Florida-Friendly plumbago species, contact your county Extension office. 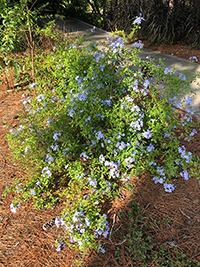