Parts of a Flower 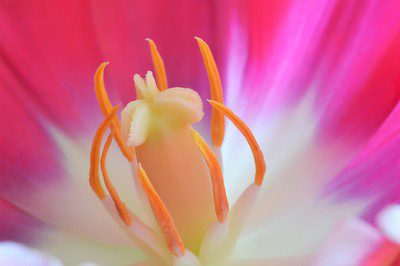 Flowers come in a dazzling array of color, shapes, sizes, and scents. They aren't there only for our enjoyment, however. These beautiful blooms are the structures flowering plants use to reproduce.

Flowers are made up of four basic parts: the pistil, stamens, sepals, and petals.

The eye-catching color of flowers usually comes from the sepals and petals. In some flowers these two parts can be hard to tell apart.

The sepals are leaf-like, usually connected at the very base of the flower. They may be green or brightly colored, depending on the plant species. Sepals surround the flower bud, protecting it as it develops. Once the flower opens, the petals are visible. These brightly colored, leaf-like parts attract pollinators. Some even have ultraviolet markings to direct pollinators to the nectar.

The pistil of a flower is sometimes called the female reproductive structure. This is because it includes the ovary where seeds (the plant's offspring) develop. Three pieces make up the pistil. A sticky stigma catches pollen. A stalk-like style holds the stigma up in the air. The ovary sits inside the flower at the base of the style. In the ovary are female sex cells: ovules. They contain a half-copy of the plant's genetic code to pass down to its offspring. Most flowers have only one pistil.

Some scientists call the stamen of a flower the male reproductive structure. It is made up of two parts: the anther and the filament. The anther produces pollen (the male sex cell) to pass a half-copy of its genetic code on to its offspring. The filament holds the anther in place to help spread the pollen to the pistil. Most flowers have more than one stamen.

If the pollen makes it to the stigma it works its way down through the style to the ovule. When the two halves of the genetic code come together a new individual is created. If all goes well a seed develops and begins the next generation. 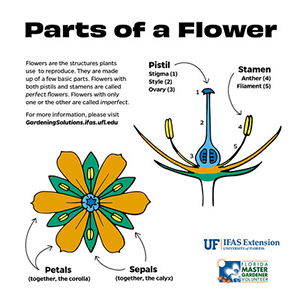 Flowers missing one or more of the flower parts are called incomplete. Some, like dogwood, have both pistils and stamens but are missing sepals or petals; these are called perfect flowers. Other plant species separate the male and female structures onto different flowers. There flowers are called imperfect flowers. You can read more about these in the next section of this article.

There are many other names for specific arrangements of flower parts. Naked flowers are those without petals or sepals, like calla lilies. What looks like a single petal surrounding the flower stalk is actually a spadix, a modified leaf. The plant kingdom offers botany students endless variety!

In imperfect flowers, the stamen and pistil are found in separate flowers. Flowers with only pistils are called pistillate and referred to as "female." Flowers with only stamens are called staminate and "male." These separate flowers may be on the same plant. If this is true, we call the plant monoecious. In Greek, mono- means "single" and -ecious comes from the Greek word for house. Mono-ecious means the pistillate and staminate flowers live on the same plant — in the same house, so to speak. Corn and squash are good examples of monoecious plants. 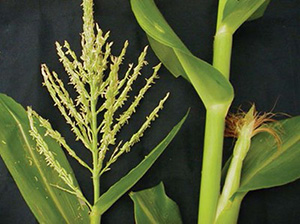 Sometimes the pistil and stamen are even more separate — not only found in different flowers but found on different plants. When some plants of a species produce only pistillate flowers and others produce only staminate flowers, we call the species dioecious. Di is the Greek word for "two" so dioecious means "two houses." Hollys, cycads, gingko, and asparagus are examples of dioecious plants. The pistil-bearing, female plants are the ones that produce seeds, if they're pollinated.

Understanding the structure and function of flowers can help you troubleshoot issues in the garden. If your squash isn't setting fruit, for example, check the flowers. Are the vines are producing both pistillate and staminate blooms? If they are, are they being pollinated? When pollinators are scarce, your squash may need to be hand-pollinated. Now that you know all about imperfect flowers, that will be no trouble at all. The more you know, the more you can grow.

For more information about flowers, contact your county Extension office.