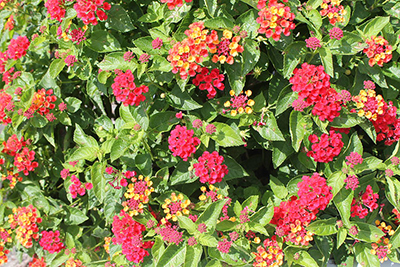 Lantana is one of the most popular landscape plants on the market. It is heat, salt, and drought tolerant. It is easy to grow, and very low maintenance. It also comes in several attractive varieties. Last but not least, both the native and non-native species are pollinator-friendly. Bees and butterflies flock to the bright mounds of color.

The most common lantana is a non-native species, Lantana camara. It is easy to find in local nurseries and garden supply stores. That said, choosing the right lantana variety is not always so simple. The UF/IFAS Assessment of Non-Native Plants lists Lantana camara as invasive. This means UF/IFAS does not recommend it for North, Central, or South Florida. It quickly invades disturbed sites and is toxic to livestock. Gardeners should take care when choosing a lantana for the landscape. 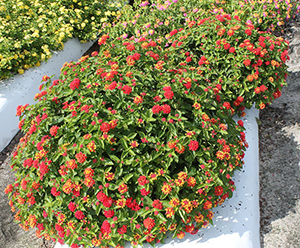 Lantana camara and its sterile varieties are perennial. The growth habit is that of a small shrub or groundcover. If the plants grow too large or leggy, cut them back without fear. During the growing season, cut back in moderation. At the end of the growing season, however, lantana can be cut back almost to the ground. The next flush of growth will yield even more flowers than before.

All lantana enjoy full sun. They are drought-tolerant, too, but will flower more when watered regularly. As mentioned above, they are also tolerant of salt and heat. This makes lantana a very hardy plant. It is a perfect choice for a low-maintenance landscape.

Lantana prefers well-drained soil. It thrives in our Floridian "sandy loam." It also grows happily in a planter or as a ground cover. In all locations, lantana benefits from light applications of fertilizer. Use fertilizer labeled "slow release" or "controlled release" to avoid runoff.

Most varieties, including sterile ones, have few diseases or pests. In all varieties, however, the leaves are highly toxic to animals. The unripened berries are poisonous, too. Please take care not to introduce it in areas where animals graze. 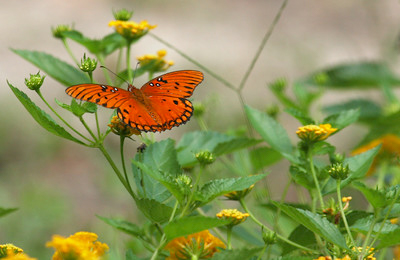 Sterile varieties are not your only option when replacing invasive lantana. Florida has native varieties of lantana: Lantana involucrata and Lantana depressa. But even in their native range along the South Florida coasts they are rare.

To include native lantana in your landscape, visit a reliable native nursery. Both species are available, and very attractive to our native pollinators.

The journey to producing sterile cultivars at UF/IFAS began 15 years ago with Dr. Zhanao Deng. Dr. Deng works on ornamental plants for Florida growers and consumers. He leads a UF/IFAS research team in Wimauma, Florida. In 2004 they began working with lantana. They looked for varieties unable to produce seeds or hybridize with native plants. This would be the beginning of a sterile lantana variety. After years of searching and breeding, Deng's lab succeeded. They produced a number of non-seeding, non-fruiting, sterile plants that don't hybridize with native lantana. 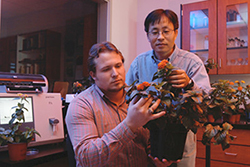 The next challenge was to make them competitive with the invasive varieties. In lantana, consumers want large flowers, a compact growth habit, and lush foliage. It took several years to breed sterile varieties that could compete aesthetically.

Finally, in 2016 Deng's team released two 'Bloomify™' cultivars. Later, in 2019, Deng's team released 'Luscious® Royale Red Zone™'. All three have a full, mounding growth habits and large, bright clusters of flowers. 'Bloomify™ Rose" features multicolored blooms. They begin as orange and fade to magenta as they age. 'Bloomify™ Red' and 'Luscious® Royale Red Zone™' also feature multicolored blooms. These begin yellow and later turn bright red. All three cultivars have large flower clusters with up to 30 individual flowers each. They are lovely landscape plants and Deng and his team are working on more.

No matter which variety you choose, sterile lantana is not less attractive. They sport bright, arresting colors and full foliage. There is an inherent advantage to these sterile cultivars, too, Deng reports. Because they don't reproduce, they put more energy into flowering. The result is a beautiful plant that competes well with the older, invasive varieties.

On of the three sterile varieties of lantana produced by the University of Florida, 'Bloomify™ Rose' Photo: J. Holm, UF/IFAS