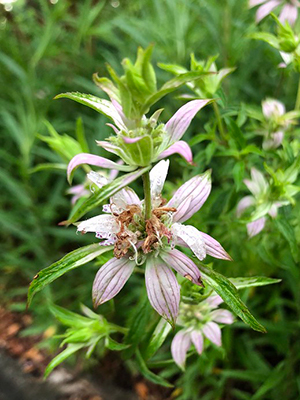 Horsemint is popular with pollinators and appealing to people, too! The fragrance of the leaves and flowers add a new dimension to a landscape. Also known as bee balm, horsemint is native herb worth adding to your garden.

The title "bee balm" refers to bees' appreciation of a plant rather than the plant itself. For this reason, many different species are known commonly as "bee balm." This list includes Monarda didyma, M. fistulosa, and a number not botanically related to horsemint at all. To distinguish this species from others, we use the common name "horsemint" or the scientific name, Monarda punctata.

Horsemint is an upright herbaceous perennial with light green leaves on tall, sprawling stems. It grows wild throughout the US from USDA Hardiness Zones 4 to 9. In this native range it grows in clumps between 2 to 4 feet wide. These clumps produce flowers on leafy stems 1-3 feet high all summer. Horsemint's pink-, purple-, or crème-colored bracts are often mistaken for flowers. Some bracts are spotted, offering this species another common name, "spotted horsemint." The true flowers are small and rest just above the colorful bracts. The fruits that follow are not showy, but it does reseed freely.

The foliage of horsemint provides a green backdrop for other flowering plants long after its own flowers fade. Although not a specimen plant, the oblong leaves are a pleasant green and fill in bare space in flower gardens nicely. 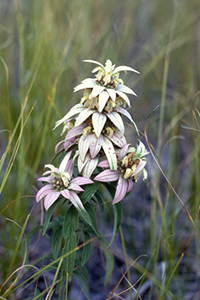 Monarda punctata belongs to the mint, or Labiatae (Lamiaceae) family. Other members of this family include thyme, basil, rosemary, and oregano. Many members of Labiatae, most notably thyme, produce a chemical compound called thymol. Extracted thymol has scientifically recognized antiseptic and anesthetic properties. Medicinal uses of horsemint were discovered by a number of indigenous peoples, including the Meskwaki, Delaware, Mohegan, and Nanticoke. These peoples used it to treat colds, skin problems, fevers, and even headaches.

Horsemint's mounding shape is well suited for an informal garden or to a mass planting. Some consider the clumps of horsemint too untidy for formal landscaping beds. Instead, consider planting it along a sunny fence or in the back row of a pollinator garden. Gardeners interested in hummingbirds, bees, and butterflies will be delighted by the variety this plant attracts. The long-lasting bracts will hold their color and provide interest for months at a time.

Like others in its botanical family, Monarda punctata is fairly easy to grow. It grows best in full sun and well-drained, sandy soil. Partial shade and a variety of soil types can support horsemint, but the form may be leggy. In the landscape horsemint is moderately drought and salt tolerant. It will not tolerate direct salt spray, however. Likewise, during long droughts, horsemint looks its best with some additional irrigation.

As a branching and fast-growing perennial, horsemint grows fuller after pruning. Yearly pruning can help keep the form dense and full. For young plants, pinch off the upper buds often to encourage branching. Florida's freezes rarely kill horsemint, so a hard pruning just before spring is recommended. Pruning to the ground, or even mowing, can help remove woody and dead stems. 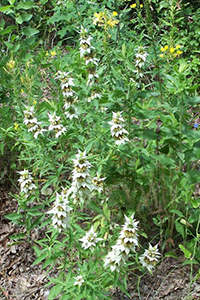 Horsemint's mounding shape can become shrub-like and woody if not pruned. Karan A. Rawlins, University of Georgia, Bugwood.org

Horsemint plants are propagated by either seed or cuttings. They are very tolerant of pests and diseases.

For more information on growing horsemint and other herbs contact your county Extension office.