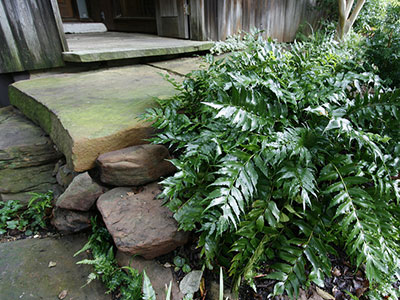 Holly fern, named for the pointy tips on its leathery leaves, is a drought-resistant plant native to Africa and Asia.  This fern thrives in low light, so it's ideal for shady areas under trees.

It's such an attractive, yet low-maintenance, plant that the Florida Nursery Growers and Landscape Association (FNGLA) holly fern out as a Plant of the Year.

As an added bonus, holly fern (Cyrtomium falcatum) is deer-resistant as well.

Holly fern forms loose two to three-foot tall clumps of deep green leathery leaves. They can be used in partially sunny to fully shady spots as a border plant, groundcover, or in a woodland garden. They can also be kept in pots on covered patios. It makes an excellent understory plant beneath old reclaimed plants like camellia, sweet olive, and other large shrubs which have had their lower branches removed.

Holly fern will stay green year-round in climates where it's protected from frost; however, colder temperatures will cause the fern to lose its fronds. The fronds can also be used in cut flower arrangements.

When growing holly fern, keep in mind that this plant can grow to be about two feet tall and three feet wide; be sure to give your plant enough room to thrive. It can be grown outdoors in USDA zones 6-11.

Plant your holly fern in partial to full shade. It will grow best in loose, fertile, moist soil. Follow a regular watering schedule for the first season to establish a deep, extensive root system. You can fertilize in late winter with a general all-purpose garden fertilizer. Winter-damaged fronds can be cut back in February before new spring growth begins in March.

Be on the lookout for pests such as scales, mites, mealybugs, and snails. The spores found on the underside of the leaves can sometimes be mistaken for pests; however, these spores are actually a necessary part of the plant's reproductive system.

The holly fern can be planted in any good quality well drained potting media and should be repotted as needed. Keep the leaves of your holly fern clean by rinsing them with a warm shower occasionally.