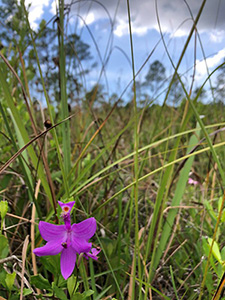 When we think of orchids, most of us imagine dazzling floral displays. Vanilla flavoring may come to mind as well. Ornamental and culinary uses make orchids among the most highly prized plants on Earth. But did you know the wilds of Florida are full of orchids, too?

Florida is home to at least 106 native orchid species. Unfortunately, 58 of these are listed as endangered by the Atlas of Florida Plants. Another 18 species are threatened. The good news is that by learning about our native orchids, you're part of the solution. The more our vulnerable species receive the spotlight, the easier it is to protect them.

Below are 11 of our native orchids, listed A to Z by scientific name:

The spider orchid (Brassia caudata) produces a spike covered with spider-like spotted flowers. Like many orchids, it is an epiphyte, an air plant. Instead of living with their roots in the soil they grow up in the air, clinging to tree branches. The spider orchid lives in trees in Everglades National Park and areas of Miami-Dade County. Today, Brassia caudata is endangered and has not been seen in the wild since the 20th century. Sellers offer other species in the Brassia genus as "spider orchids." Only Brassia caudata is native to Florida. 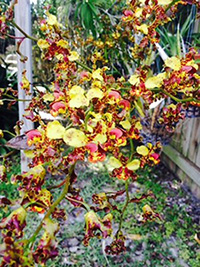 Four of the five species of grass pinks (genus Calopogon) are also native to Florida. They are all terrestrial and grow throughout the state of Florida. Most grow alongside other wildflowers in meadows, flatwoods, and prairies. Grass pinks are so common in some areas that they are mown down in highway medians. A few grass pink species, like Calopogon multiflorus, are endangered, however. Their habitats overlap the more common species, making conservation tricky.

The cigar orchid (Cyrtopodium punctatum), also called bee swarm orchid, was once common in the southern counties of Florida. Its horn-like pseudobulbs earned it another common name: cowhorn orchid. Currently they are endangered due to poaching. A single plant can be as large as 5 feet across and have more than 500 flowers. The flowers are distinct, too — yellow with burgundy spots. It's no surprise that enthusiasts prized these plants.

Today the best way to enjoy cigar orchids is to spot them growing wild in Florida's southern swamps. Look for them in remote locations, growing on tree trunks, usually close to the ground. Some of the largest single plants are found in the tops of dead trees in the everglades area of Collier County. There are propagation projects underway in hopes to reintroduce cigar orchids to their native range. 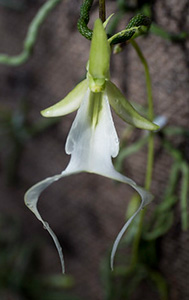 Florida's ghost orchid (Dendrophylax lindenii) is famous, known to plant lovers and book lovers alike. The Orchid Thief, written by Susan Orlean, and film adaptation were inspired by the enthusiasts that hunt for this rare flower. Seminole Indians took notice of the orchid, too. They used the fibrous, inner core of the root as thread.

Ghost orchids are epiphytes, leafless, and generally produce only one or two flower spikes. Buds open one at a time, adding to the rarity of the sight. The white bloom is about 5 inches long and bobs along like a ghost in the breeze. If you'd like to see a ghost orchid for yourself, visit the Corkscrew Sanctuary in Collier County. Each summer the facility sets up a telescope focused on a flower growing in the wild. Visitors can enjoy this elusive, protected species without disturbing its habitat.

Currently this orchid is endangered and found only in wild areas of Collier and Hendry counties. As of 2016 there were an estimated 2,000 plants left in the wild. Thankfully, literary fame gave conservation efforts a boost. Dr. Michael Kane and his colleagues at UF/IFAS have successfully cultured the orchid in their micropropagation lab. A good number of the young plants survived the move to the greenhouse and then into the wild. "For orchid conservation, this is big," says Kane. "We are very excited." 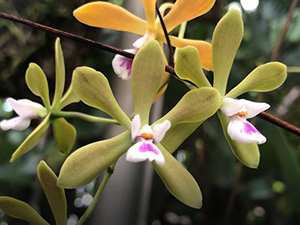 The Florida butterfly orchid (Encyclia tampensis) is one of the showiest native orchids. Its flowers are small and colored yellow, copper, green, orange, or bronze. A cluster of these blooms looks like a flutter of tiny, colorful butterflies. There is also an 'alba' form with white and green flowers. Throughout the state they bloom between May and July.

The Florida butterfly orchid grows as an epiphyte in almost every county in the state. Notably, the orchids can withstand a freeze, making them popular on the northern edge of their range. But while this is one of Florida's most common epiphytic orchids, you should still be cautious about your source when buying. Encyclia tampensis is listed as commercially exploited due to widespread collecting. But that doesn't mean you can't enjoy the Florida butterfly orchid in your landscape!

Some areas, like Broward County, are so urban that native habitat is scarce. To address the issue, UF/IFAS Extension Broward County has joined forces with the Fort Lauderdale Orchid Society. As part of their training, Broward's Master Gardener Volunteers learned to establish native orchids in home landscapes. They've installed orchids in 20 Broward County landscapes as of 2021 and plan to continue. Similar efforts are ongoing at Delnor-Wiggins Pass State Park. Park staff have teamed up with Dr. John Finer, students from Florida Gulf Coast University, and the Naples Botanical Garden to reintroduce the orchid and monitor its establishment with GPS. 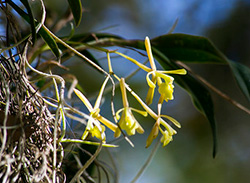 Green-fly orchids (Epidendrum magnoliae) grow alongside resurrection ferns and Spanish moss. Like their epiphyte neighbors, these orchids colonize the branches of live oaks. The flowers are small and yellowish green, hanging down from arching tree limbs. Green-fly orchids are far from endangered. Rather, they are among the most common epiphytic orchids in the northern half of the state. Like the Florida butterfly orchid, they can withstand a freeze.

Botanists named the night-scented orchid (Epidendrum nocturnum) for the fragrance the blooms produce at night. The flowers are white or yellow and large, but spindly. Like many orchid species, night-scented orchids grow epiphytically, up in the trees. Night-scented orchids are rare. They grow only in hammocks and swamps in South Florida. E. nocturnum is endangered so collecting them from the wild is out of the question.

The water-spider orchid (Habenaria repens) is one of the few truly aquatic orchids. Mats comprised of hundreds of these orchids float along the surface of bodies of water throughout Florida. On land you will usually find them along marshy shores or growing in wet ditches. The small, pale-green flowers open from a dense flower stalk. The narrow, deeply divided flowers look like a long line of spiders climbing an aquatic weed. 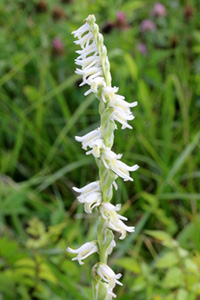 The orange fringed orchis and orange crested orchis (genus Platanthera) are just two members of a genus of orchids known for their colorful flower spikes. And no, "orchis" isn't a typo. It was the original genus name for over 1000 species of orchids. As scientists reorganized the taxonomic system, they split this large genus into several smaller groups, including Platanthera. Although the group name is obsolete, some species still have "orchis" in their common names. Looks for these species in open, wet meadows in North and Central Florida, but tread carefully. Most members of the genus are endangered or threatened.

Ladies' tresses (genus Spiranthes) are a group of about 50 terrestrial orchids, many of which are native to Florida. The genus gets its name from the cascade of small, white flowers that rises above the groundcover. You can spot their upright, twisted flower spikes growing along roadsides and in open woodlands. One or more species of ladies' tresses occupy every county in Florida.

For readers interested in learning more, we suggest Wild Orchids of Florida by Paul Martin Brown. You may also enjoy joining a local orchid or native plant interest group.

Adding orchids to your landscape

Our native orchids tend to be less eye-catching than their commercially grown, tropical cousins. Still, they add sense of place and an interesting element to your garden. 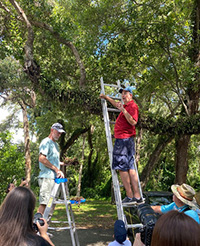 If you're interested in native orchids, be sure to buy plants from a reputable source. Many species, like the ghost orchid, are threatened or endangered. Never collect them from the wild and question sellers to be sure they didn't either. If you're having trouble finding a source, give us a call at your county Extension office. The Master Gardener Volunteers in your area may know of a local source.

As you plant, be aware that there are invasive orchids, too. The UF/IFAS Center for Aquatic and Invasive Plants lists Chinese crown orchid (Eulophia graminea) as invasive. The lawn orchid (Zeuxine strateumatica) and the African ground orchid (Oeceoclades maculate) are currently under review as well. The UF/IFAS Assessment recommends you manage these plants to prevent escape. 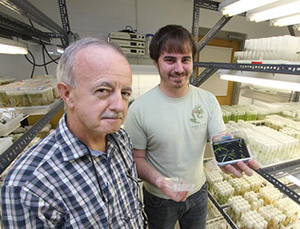