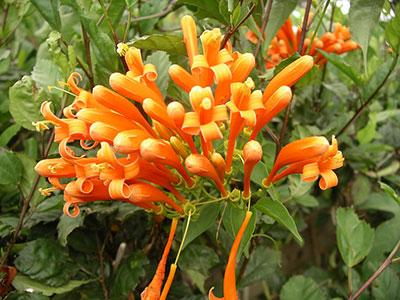 Flame vine (Pyrostegia venusta) is a stunning plant that grows in many parts of Florida. At a time of year when there isn't much in the way of eye-catching color, flame vine dazzles with dense clusters of bright orange flowers. This evergreen vine can bring a touch of classic fall colors to your Florida garden.

Flame vine, which was formerly known as Pyrostegia ignea, is a flowering woody vine in the Bignoniaceae family, which also includes trumpet creeper. This sprawling vine sets your landscape ablaze with clusters of orange, 3-inch long tubular flowers from fall to spring; in some areas it may even flower lightly during the summer.

This vine is fast growing, and can spread like wildfire if left unattended. Using its tendrils to climb, flame vine is great for covering fences. With regular maintenance, it can be kept in check and looking lovely. Just don't let it roam too freely—flame vine has been known to choke trees over which it's been allowed to grow.

While the IFAS Assessment of Non-Native Plants in Florida's Natural Areas states that flame vine is not documented to be a problem species, it is regarded as invasive in other parts of the world like Tanzania, Australia, and Hawaii. Contentious gardeners should take note and control their vine's growth to prevent it from escaping the confines of their yard.

But the work is worth the effort. Not only does flame vine put on a dazzling display, hummingbirds love the tubular flowers for their nectar. On top of that, this South American native is virtually pest-free, meaning that most of your upkeep will be limited to pruning and training.

Flame vine will climb anything that offers decent support, so while it's great for fences, trellises, and archways, it's best to avoid planting near trees that could be strangled by its rapid growth. Hardy in USDA zones 9–11, flame vine can sometimes be found flowering as far north as zone 8b.

Given a spot in full to partial sun, this vine will flourish and have a high drought tolerance once established. Flame vine does require pruning yearly to remove dead wood and after flowering to keep the it under control. This vine naturally flowers most at the top of the structure it's growing on, but with regular heading back of several stems, you can encourage your vine to produce flowers and foliage on lower and middle portions. Be sure to do your major pruning before Thanksgiving each year, or risk injuring the blooms for next year.

While this plant does produce bean-like seed pods, the pods rarely contain viable seeds. Because of this, flame vine is best propagated by layering suckers.

While it may involve a bit of work to keep your flame vine well-behaved, this show-stopping plant is a great flowering vine for many Florida gardens.