Coleus plants are mainly prized for their bright foliage and not for the flowers. "Our breeding program focuses on developing new cultivars with two primary characteristics—sun tolerance and late or no flowering," said Nguyen. "The secondary characteristics we focus on include high vigor, high branching and novel colors."

At the time, few cultivars were commercially available that provided these desirable characteristics. The cultivars opened up a new landscape option to those with sunny yards. 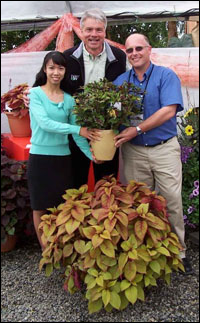 Nguyen began breeding coleus in 2003 when she started as a graduate student. The research began with 15 open-pollinated varieties. For the 2006 crop, approximately 30,000 seedlings were grown and those numbers have now been reduced to 150 cultivars.

All of the cultivars go through a trialing process where they are subjected to high light intensities, high humidity and temperature, drought stress, wind stress, insect damage, competition with weeds and the possibility of diseases.

The plants then go through three selection rounds. Plants are discarded on the basis of low vigor, poor branching, dark or non-novel color, poor rooting, and early flowering.

Nguyen was originally born in Vietnam and immigrated to the United States with her parents when she was five. Her interest in plants began from spending many afternoons and summers with her mother in their garden, and a high school science teacher sparked her interest in genetics. Nguyen's school had an art magnet program; this probably had an influence on her career trajectory as well.

"The reason I like plant breeding so much is because you can mix both science and art together," Nguyen said. "Plant breeding is like creating art masterpieces through the use of tools such as oils, charcoal and pencils—but just with plants instead."