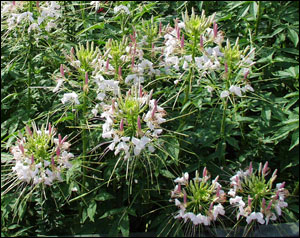 Cleome has been a longtime favorite in Southern cottage gardens because of its attractive foliage and flowers, and its ability to take the summer heat. And now gardeners have more options, thanks to new varieties like 'Senorita Rosalita'® that have come on the market.

Unlike some plants that fade in the mid-summer heat, cleome keeps right on performing. It blooms heavily in early summer and continues to bloom throughout the season.

The whiskery, spider-like flowers can be white, pink, or purple, and often attract hummingbirds. It's often called "spider flower" because of the form of its flowers.

The flowers are produced along stalks that can grow up to five feet tall, depending on the cultivar. The flowers start blooming at the bottom of the stalk and progress upward as summer stretches on.

These tall flower stalks make cleome a great plant for adding height at the back of a flower bed. Certain older cultivars tend to be a little leggy at the bottom and have "bare knees," so it can be a good idea to plant something else in front of them.

A nice dwarf variety that performs reliably well in Florida is 'Linde Armstrong'™. This pink-flowering cleome will get just 18-24" tall and tends to have a fuller form than other cultivars.

Also, many older varieties have strong spines on the stem and may put off a somewhat skunky odor. An advantage of the newer cultivars is that most are thorn- and odor-free.

Technically, cleome is an annual, though it may survive for longer than one season in parts of Florida. Cleome often self-seeds, which means you'll have plants in the same location year after year. However, certain newer cultivars like 'Senorita Rosalita' are sterile and won't produce seeds.

Cleome can be planted as transplants, but it can also be direct seeded in warm, spring soil. If you start from seed, be sure to thin the seedlings after they sprout. Varieties that work well when grown from seed include 'Cherry Queen', 'Mauve Queen', 'Pink Queen', 'Purple Queen', 'Rose Queen', and 'Ruby Queen'.

Cleome performs best when planted in a spot that has well-drained soil and receives full sun, but it can also take some shade. Again, cleome is best planted at the rear of a bed because of its height.

Add a layer of mulch around the plants, taking care not to let the mulch touch the stems, and water them regularly until they're established. Cleome is fairly drought tolerant once established, so the plants should be watered as needed. These plants will also benefit from regular fertilizing.

Cleome is generally pest free, but can be prone to attacks from stem boring insects in Central and South Florida that can cause plants to decline and die.

For more information on cleome, contact your county Extension office.