Century plant is the common name usually associated with Agave americana. While there are over 200 species of agave that vary greatly in size and color, century plant is one of the most impressive and show-stopping. Not only does this plant look great in the landscape, it's a low-maintenance, drought-tolerant plant. 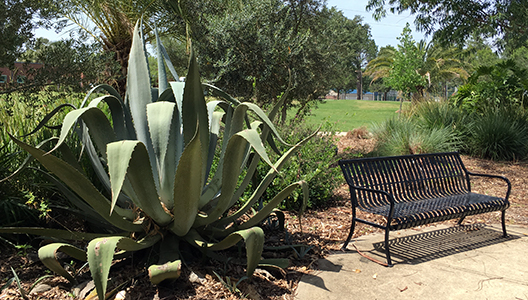 The plant's common name is a bit misleading; while many people think it means these plants live for—or bloom after—100 years, it actually matures much faster. Century plants generally take between 8 and 30 years to flower.

Once the plant has reached maturity, a central stem grows up to 20 feet tall. Pale yellow or white blossoms appear atop this branched flower spire during summertime. Most century plants will die after they flower, although the spineless century plant (Agave attenuata) flowers multiple times a year.

Century plant is quite striking, with large succulent leaves that are greenish-blue color and boldly textured. The leaves are very large, reaching up to 6 feet long and 10 inches wide. The spread of the mature plant is quite an impressive sight for any landscape—up to 12 feet.

Thanks to the sharp spines at the end of each toothed leaf, these plants need to be planted well away from where anyone may brush up against them. Century plant should be planted at least 6 feet away from areas where people and pets are walking or playing.

Variegated century plant (A. americana 'Marginata') has striking twisted green leaves with bright yellow marginal bands. The variegated leaves look like ribbons folded and twisted across each other. Like those of the single-colored century plant, leaves can grow as long as 6 feet and 10 inches wide.

While century plant can be a dramatic addition to your landscape, its considerable mature size and sharp foliage may not be right for every yard. If you are looking for similar aesthetics, just scaled down and less pointy, check out spineless century plant (A. attenuata).

Spineless century plant is great for smaller landscapes as it doesn't get quite as big; it reaches between 2 and 3 feet tall and 3 to 6 feet across. Individual evergreen leaves are light blueish-green and are between 1.5 and 3 feet long. These leaves don't end in the same sharp point as those of A. americana, making it a less-hazardous choice for yards enjoyed by kids and/or pets. Pale yellow to white flowers bloom periodically throughout the year about 10 years after planting.

This highly drought-tolerant and moderately salt-tolerant plant grows well in zones 9 – 11. Agave plants are easy to grow, but they do have a few "needs" to thrive. They need at least 6 hours of direct sun and well-drained soils. Planting in well-drained soil is particularly important in preventing root rot, especially in North Florida where cooler winter temperatures may add stress to your plant. If your in-ground conditions are not ideal for growing century plant, try growing it in a container where you can control the soil conditions. Just remember that century plants can get quite large; the smaller spineless century plant is a better choice for growing in a container. 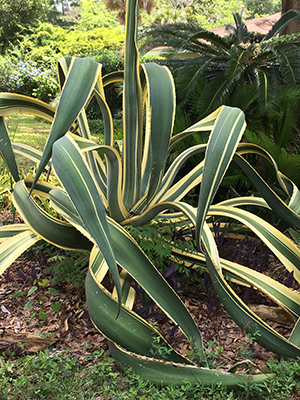 Once your plant has matured you may notice multiple "pups" around the base of the mature parent plant. After the parent plant has died you can remove and transplant the pups and start the growing adventure over again.