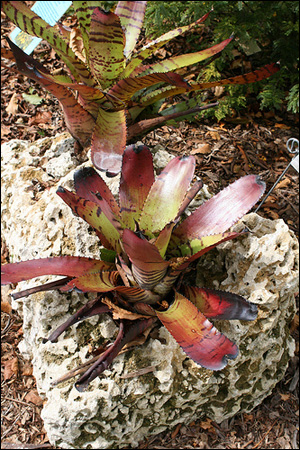 Bromeliads are standouts for their bold, often colorful leaves and for the exotic flower spikes that many produce.

Most bromeliads are tropical or subtropical and can be grown outdoors in frost-free areas of Florida. If you live in North Florida, you can opt to grow them in containers and bring them in when frost threatens.

Bromeliads can also be grown indoors as houseplants in any space that receives bright, diffused light but not direct sun, including covered porches.

The main thing to consider when choosing a bromeliad is the amount of light your spot receives. Bromeliads come from a wide range of environments, from areas with deep shade to full sun, so chances are good that you can find one suitable for your site.

If you have a particular bromeliad and aren't sure how much light it needs, talk to the staff at your local Extension office.

Moisture is also important. Bromeliads absorb water and nutrients mainly through their leaves and through the cups at the base of their leaves. Many bromeliads are from tropical areas and prefer high humidity conditions. However, take care not to overwater since they don't like wet feet.

Compared with other garden plants, bromeliads have limited root systems that serve mainly as anchors for the plant. It is best to provide them with a loose, well-drained potting mix, for example one part peat, one part bark, and one part coarse sand.

Although the bromeliad is a fairly pest-free plant, scale and mealy bug insects can sometimes be a problem. Your county Extension office can provide safe and effective management information.

If you're growing bromeliads outdoors, you should periodically flush the natural cups that collect water at the base of the leaf rosettes. These can be a breeding ground for mosquitoes.

There are thousands of different bromeliads that come in an array of shapes and sizes and work in many light conditions, so you’re bound to find a variety that can work for you. More than 28 different genera have been named so far, including these garden favorites:

Aechmea Often called urn plants because of their upright, vase-like shape. The leaves are typically colorful and have small spines along the edges, and the plants can produce colorful flower spikes that can last from a few weeks to six months.

Ananas This genus has thin leaves and includes the commercially grown pineapple plant, Ananas comosus ‘Smooth Cayenne’. Other popular cultivars include A. comosus ‘Sugar Loaf’, which is smaller than ‘Smooth Cayenne’ and produces extremely sweet, juicy fruit, and .A. comosus var. variegata, which has creamy white and pale green striped leaves and has fruit that starts out bright pink.

Billbergia These bromeliads have a tall, narrow vase shape and spiny-edged leaves and are widely grown by gardeners. They can spread easily through garden beds if grown in the right conditions. They can also be grown in trees, which is how they are found in nature.

Cryptanthus Plants in this genus are commonly known as earth stars because of their flat growth and wavy-edged leaves. They are quite popular with many bromeliad enthusiasts, with more than a thousand hybrids. One of the most widely grown is Cryptanthus bivittatus.

Dyckia Known for their hardiness, members of the Dyckia genus are more tolerant of harsh environments and drought than many other bromeliads. They tend to form clumps and can produce yellow or orange flower stalks that are up to 5 feet tall. The sharp spines on the leaf edges can be very decorative. Read more about dyckia.

Neoregelia These bromeliads are grown primarily for their showy foliage with bright colors and interesting patterns, and they are among the most widely hybridized types of bromeliads. Small flowers appear inconspicuously inside of the leaf cup when the plants bloom. These bromeliads are sometimes called "painted fingernail" for the pink markings on their leaves.

Tillandsia This genus has close to 500 species, and is the largest, most diverse and widely distributed genus in the bromeliad family. Most plants in this species are epiphytes, meaning they draw moisture from the air and often grow on other plants. Florida's native bromeliads like Spanish moss (Tillandsia usneoides) fall under this genus. One popular species is T. cyanea, which produces pretty flower spikes and is often sold as a gift plant.

Vriesia Some of these bromeliads can get downright huge. Vriesea hieroglyphica can produce individual leaf rosettes that reach up to five feet across. It has shiny leaves with light and dark green banding. It can work well indoors or outdoors in light shade, and will even tolerate slight frosts if planted under overhanging foliage.

Florida is home to 16 native species of bromeliads and two natural hybrids, all of which are epiphytes. The ubiquitous Spanish moss is probably the most recognizable native.

Contrary to what some people believe, these plants are not parasites—they're epiphytes. They cling to trees and shrubs for support only, and get their energy the same way other plants do—by photosynthesizing. If Spanish moss gets rained on, you can actually see the green of its chlorophyll shining through its outer coating of gray scales.

Florida's bromeliads are threatened by human collection and development, as well as by the spread of the invasive Mexican bromeliad weevil. You can help by learning more about the bromeliad weevil and by never harvesting bromeliads from the wild.

While bromeliads are tropical plants, certain varieties can be planted in the North Florida landscape. The most cold-hardy bromeliads are those in the genus Puya. These spiky plants naturally grow in areas like the Andes where they experience desert conditions and even snow. They’re capable of surviving temperatures down to 20 degrees.

Bromeliads with thicker leaves are often more cold-tolerant, including many of the plants in the genus Dyckia. Several species of Aechmea, Nidularium, and Vriesia are also fairly cold hardy, but their tolerance will vary by variety.

If you’re ever in doubt about the hardiness of your bromeliads, cover them with a layer of frost cloth or a blanket to help protect them. 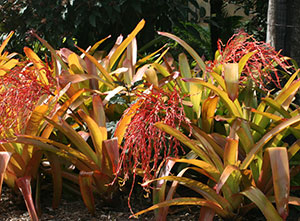 If you're captivated by bromeliads, check out "Bromeliads for the Contemporary Garden" by Andrew Steens and published by Timber Press. The book is brimming with detailed information about the many types of bromeliads and how to care for them.