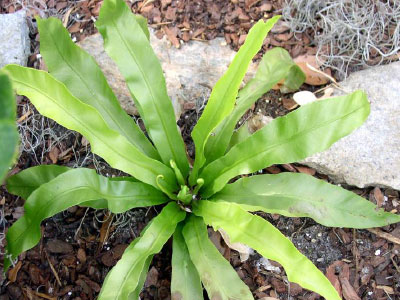 Bird's nest fern has wide, shiny leaves (fronds) that slowly uncurl from the center giving it a nest-like appearance — and its name. This plant makes a lush addition to shaded, protected areas of the landscape, where it can shine as a specimen or a container plant. Unlike many ferns, bird's nest makes a fairly reliable houseplant when provided indirect light.

The large, stemless, bright-green fronds of the bird's nest fern (Asplenium nidus) have a prominent dark brown or black midrib and unfurl from a tight, rosette center, eventually reaching 2 to 4 feet tall and wide. They do not produce flowers or fruits, rather, like all true ferns, reproduce by spores found on the undersides of fronds.

There seems to be some confusion when it comes to the names of various bird's nest fern cultivars. We consulted with Marc Frank, an Extension botanist with the Florida Museum of Natural History. He explained that there are dozens of cultivars (variants bred or selected by humans) of Asplenium nidus. Some are crested, with forked tips or multiple lobes at the tips of the fronds. Others have wavy, crisped, pleated, or fringed margins or even small finger-like lobes along the margins. There are also dwarf varieties. Multiple forms exist within each group (crested, ones with funky margins, dwarf) and the names applied to the cultivars are not at all stable. In other words, horticulturists have not been consistent in applying cultivar names to the various forms, so the same name might be applied to plants that look very different. 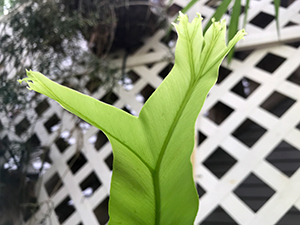 This bird's nest fern has an unusual split frond with fringed lobes at the tip. Photo: UF/IFAS.

Native to tropical Asia, bird's nest fern thrives in Florida's humid climate in zones 9 to 11; plants in zone 9 will need freeze protection. Plant it in an area with partial to full shade and rich soil. When grown in sunnier locations, the fronds turn yellow and the plant stops growing. Like many ferns, this plant is not drought-tolerant, so don't let it dry out. As an epiphyte, bird's nest fern can grow either on the ground in moist, loose soil, or on trees or rocks with very little media. It can also be copper-wired to a fibrous slab. Container-grown bird's nest plants that have outgrown their pot should be repotted in spring when the new growth begins. 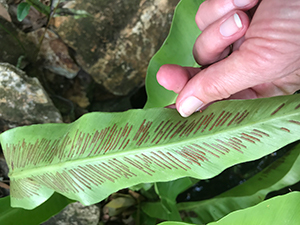 Here you can see the brown spores on the underside of the bird's nest fern frond.