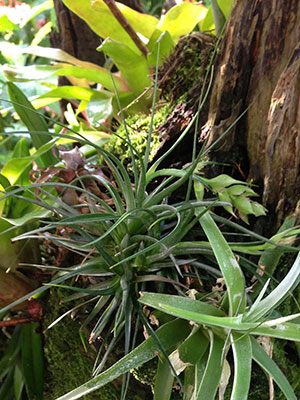 When people use the term "air plant," they're usually referring to Tillandsia spp. These odd-looking plants have been getting new attention recently, their rise in popularity having a lot to do with how eye-catching they are coupled with how little care they require.

People have become interested in using these plants, which resemble small tufts of grass, to create unique displays in their homes. With over 500 different species of Tillandsia, it isn't surprising that a number of them make attractive and interesting houseplants. As a bonus, some have small, but beautiful, blooms as well.

Tillandsia plants are part of the bromeliad family and are epiphytes, meaning they use plants or other structures to support them. People unfamiliar with epiphytes sometimes worry that they damage the plants they grow on. Epiphytes do attach themselves to plants, but they do not harm the plants, unlike mistletoe, a plant parasite. "Air" plants get their common name from the fact that they get all of their nutrients from the atmosphere.

Most species of Tillandsia have thin, stiff leaves covered in scales, often giving them a fuzzy, gray-green appearance. They have small flowers, usually less than two inches in size.

Since they anchor themselves to something other than soil, air plants can grow on or in a variety of interesting and creative surfaces. Some people like to grow air plants inside glass globes that are suspended from ribbon or fishing lines. You can also attach air plants to shells, pieces of cork, bark, or laid on a bed of dry pebbles in a shallow dish. You're limited only by your imagination.

Finding the right Tillandsia plant for inside your home is more about picking one with the look you want since the care for different species will be about the same. If you are looking to grow Tillandsia outside, be sure to check that the species you select is suited for your USDA hardiness zone. A good place to start is with one of the native species, but take care when purchasing.

Florida's bromeliads, including Tillandsia, are threatened by human collection and development, as well as by the spread of the invasive Mexican bromeliad weevil. You can help by learning more about the bromeliad weevil and by never harvesting air plants from the wild.

While air plants are incredibly low-mainentance, they do require three things: light, air circulation, and an occasional light mist of water.

Tillandsia needs bright, but not direct, sunlight to thrive. Keep your indoor air plants near a south, east, or west window. Outside, Tillandsias will thrive in an area of the landscape where they will receive light shade and protection from direct sun.

Once a week, water your indoor air plant with a good misting—to the point where water is running off the plant. You should allow your plant to dry out between waterings. Curled or rolled leaves indicate that your Tillandsia is dehydrated.

Tillandsia does not always bloom indoors but if yours does, expect to see flowers in late winter and mid-summer. If blooms do come they can last for days or even months. Be aware, the "mother" plant will slowly die after it blooms, but new plants will sprout from it.

Whatever surface you mount the Tillandsia on, be sure that it doesn't hold water. You can attach air plants to a surface using an adhesive like liquid nails or hot glue—just be sure to let the hot glue cool slightly, or you can tie your plant to the mount using wire.

Air plants can provide your home with a bit of greenery that's unique and easy to care for. For more information on growing Tillandsia indoors or in your landscape contact your local county Extension office.