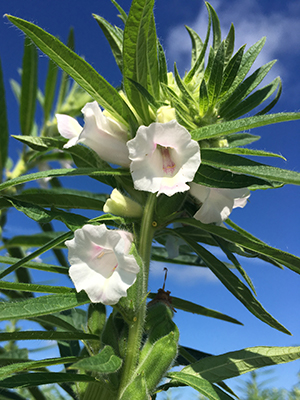 Ready for something new? Growing an ancient crop like sesame in your home garden allows you to explore new flavors and ideas in your cooking while connecting with the past.

Sesame (Sesamum indicum) attracts a wide range of pollinators, making it a favorite plant for bumble bees and other insects. And don't forget aesthetics; this plant is good-looking, with an upright growth habit and showy bell-shaped flowers.

As far as cooking goes, there's more to sesame than just decoration for burger buns. Sesame seeds are used as a condiment, mild spice, in nutritive pastes, and in the production of sesame oil. Tahini, an ingredient used in humus and other recipes, is made from crushed sesame seeds. It's even used in desserts, like the Greek dessert pasteli, made with sesame and honey.

Sesame has been cultivated for a very long time; 4,000 years ago it was a highly prized oil crop in Babylon and Assyria, and the Chinese burned sesame oil for light. African slaves were the first to bring sesame seeds, which they called benne, to America.

If you were to look for benne seeds today, know that benne is an heirloom sesame; the difference is comparable to an heirloom tomato versus modern tomatoes. Benne seeds have a stronger, slightly more bitter taste than modern sesame. Additionally, the benne seeds are brown as compared to the usually white sesame seeds.

In America, benne plants were first grown in slaves’ gardens. Benne seeds were used as a fat and protein source and the leaves were cooked as greens. When the leaves are pounded prior to cooking they act as a thickener the same way okra does.

Sesame plants usually grow to 2 feet tall, although they can reach heights of 4 feet. Tubular, bell-shaped flowers are light purple, rose, or white in color. Older cultivars have smooth and flat leaves while newer cultivars (referred to as "non-shattering") have cupped leaves. Grooved seedpods develop after the flowers and each pod can contain more than 100 seeds. Once they mature, the seedpods burst open (or "shatter") and spill the seeds. Because of the shattering characteristic, sesame seeds were often harvested by hand. A shatter-resistant variety that retained its seeds during harvesting was first developed in the 1940s.

The biggest challenge to growing sesame in Florida is that our summers, when sesame is grown, are wet. As a drought-tolerant crop, sesame doesn’t perform well when soils are too moist. When selecting cultivars for planting be aware that the most drought-tolerant cultivars fair poorest in Florida’s humid climate. 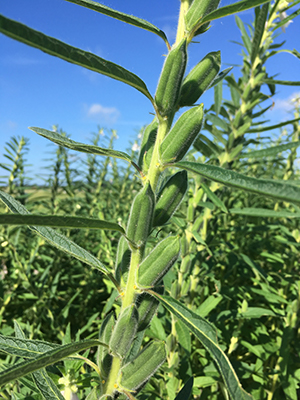 Seed pods, not ready for harvesting, at the UF/IFAS Plant Science Research and Education Unit in Citra, FL. UF/IFAS.

Sesame is planted from seed and grows best in full sun. Plant sesame when soil temperatures are above 68 degrees. Seeds are tiny; they should be planted ½ inch deep.

Make sure there is good soil-to-seed contact and sufficient moisture to ensure good germination. It may take up to 5 months for plants to sprout, flower, and produce seeds. Sesame is self-pollinating.

Seeds can be harvested when the top parts of the stalk dry out. While harvesting, be careful not to shatter the pods which would cause the seeds to spill out onto the ground.