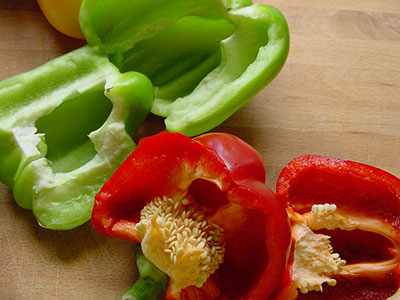 Peppers are a popular vegetable to grow in Florida and with such a wide variety of choices it's no wonder. There are tiny peppers grown solely for ornamentation, sweet bell peppers, and hot chilies, like St. Augustine's famous datil peppers.

The datil (Capsicum chinense) pepper has long been grown in St. Augustine and has very hot, small blunt fruits that ripen to a bright yellow-orange. They have been compared to habanero peppers, but enthusiasts say the flavor is more complex and fruity. Local legend says they were brought to Florida from Spain by Minorcans. Local gardeners use the peppers to make hot sauces and dishes like chicken pirlau and Minorcan clam chowder. Datil plants do experience problems with pepper weevils.

Even if you don't want to eat them, hot peppers can still be fun to grow. Their colorful fruits can be red, purple, yellow, or orange and they easily add interest to landscape beds and containers. In fact, some pepper varieties like 'Black Pearl', 'Calico', 'Purple Flash', and 'Sangria' are grown almost exclusively for their ornamental value. Unlike some other peppers, hot peppers may keep producing even when the temperatures and humidity climb.

Ornamental peppers are compact, reaching ten to twenty inches in height. Their size, interesting foliage, and attractive fruit make them ideal plants for a container garden. You can also place them in borders or use them as a groundcover.

Ornamental peppers produce colorful fruits from May through fall. The fruits come in a range of colors including red, purple, yellow, and orange. Many varieties of ornamental pepper also have attractive foliage.

Despite their name, some ornamental peppers are edible and tasty; however, many are very spicy, and people without a sturdy palate will enjoy just looking at them. 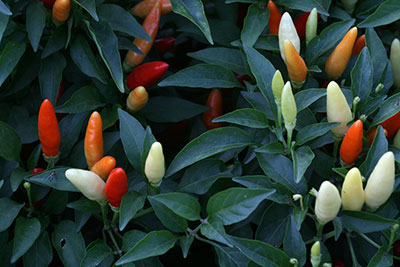 You can buy pepper transplants or you can start your own from seed. If you're interested in trying some of the more exotic peppers, like the ghost pepper, you may need to order seeds online.

It may be easier to start pepper plants from seed indoors as the small seeds are easily washed away during watering in the garden. You can start your peppers from seed indoors in late winter for planting after the last frost in spring. Peppers can be started again in midsummer for an early fall planting in August and September.

The spacing of your pepper plants will depend on the varieties you are planting so be sure to check the spacing requirements for your chosen peppers. As your pepper plant gets larger and fruits begin to weigh it down staking can help keep your plant upright.

Watering regularly will keep your plants producing fruits, remember, pepper plants prefer moist but not wet soils. Mulching around your pepper plants will help hold moisture in as temperatures rise.

Like other vegetables, peppers should be planted in full sun and will thrive in well-drained fertile soil. While peppers are not too particular about soils, they do best in those with a pH around 6.5.

Fertilize your peppers at the time of planting and again two to three times throughout the growing season or select a controlled release fertilizer for season-long feeding. Once you plants begin to produce fruits, you may want to reduce the amount of nitrogen in your fertilizer as too much nitrogen in the soil can cause your pepper plants to produce little or no fruits.

Your peppers will be ready to harvest once they're firm and crisp, about 60 to 80 days after transplanting or 80 to 100 after planting from seed. Many gardeners prefer to harvest bell peppers while they are green, while others leave the fruits on the plant to ripen further. Always be careful when handling hot pepper varieties, the same properties that give these peppers their famous heat can also cause your eyes and other body parts to become painfully irritated.

Hot peppers can be planted as perennials in some climates and will continue producing fruits longer than sweet bell peppers. Bell pepper varieties can also last a long time provided judicial pruning and fertilization under greenhouse conditions.