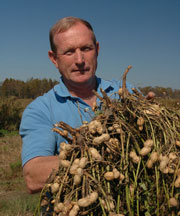 Peanuts, also known as groundnuts or goobers, have a long history of cultivation. They are native to South America, where archeological finds of pottery shaped like, or adorned with, peanuts date back as far as 3,500 years ago. Incans in Peru used them in religious ceremonies. Conquistadors took peanuts back to Spain, where traders and explorers then carried them to Asia and Africa.

In the 18th century, peanuts made their way back to the Americas; this time, African slaves brought them to the New World. But it wasn't until the early 19th century were peanuts grown as a commercial crop. First grown in Virginia, they were used mainly for oil, food, and as a cocoa substitute. The demand for peanuts grew steadily; as a need for affordable, high-protein food during the Civil War and world wars, but also from the desire for the trendy new snack food sold at PT Barnum's circuses and later by street vendors.

Historical discussion of peanuts would be incomplete without reference to the work of Dr. George Washington Carver (1860's – 1943). Despite having many obstacles in his way, namely being born a slave, Carver pursued an education in botany and focused his academic research on alternative crops like peanuts for their potential to enhance nutrition for farm families.

From their ancient beginnings, peanuts have come a long way; they're now considered the 12th most valuable cash crop in the United States. It's clear that peanuts have a rich history, and today they remain a popular snack throughout the world, but did you know you can grow them in your home garden?

Peanut plants (Arachis hypogaea L.) are low-growing, self-pollinating annuals. The nuts are legume pods like peas and beans, but unlike other legumes, mature underground. Thousands of cultivars exist, but four types are the most popular: runner, Spanish, Virginia, and Valencia.

Runner types are grown commercially in Florida and the rest of the Southeast. Runner types are great for home gardens because they have good flavor and yields. Two varieties to consider are 'Florunner' and 'Sunrunner'; they take about 135 days to mature.

Spanish types produce small-kernelled peanuts. 'Star' is a popular Spanish type that takes 120 days to mature. Other Spanish varieties you can plant in Florida include 'Tifspan', 'Sancross', and 'Tamnut 74'.

Virginia types produce large seeds and the peanuts are especially well-suited for roasting. 'Florigiant' is a Virginia type peanut that takes about 135 days to mature and does well in Florida.

In North and Central Florida, you can plant peanuts from March through May. To plant, use raw peanuts as seeds and leave them in their shells for fastest germination. Plant them 4 to 6 inches apart and 2 to 4 inches deep, in rows spaced 24 to 36 inches apart. Garden soil should be prepared the same way you would when planting any other vegetable.

Like other legumes, peanuts are capable of creating nitrogen within its root nodules; this is called "fixing." They do this with the help of nitrogen-fixing bacteria. To ensure that your peanut plants thrive and create plenty of nitrogen, inoculating the seeds with these friendly bacteria is advised. Inoculant can be purchased in seed stores and through seed catalogs. Follow label directions. To develop properly, peanuts also need an adequate calcium supply, so apply agricultural gypsum beside the row just after the plants bloom.

While the basics of common plant reproduction are familiar to many gardeners, peanuts reproduce by a fairly rare method called geocarpy, meaning that the plant flowers aboveground, but the fruit forms and matures underground. As peanut plants grow, small yellow flowers will appear on short stems. Once the flowers begin to fade, a self-pollinated peanut ovary forms, commonly called a "peg." This peg grows downward and enters the soil. Once underground, then peanuts will begin to form.

Peanut plants will continue to grow and flower, but don't worry—your peanuts should all be ready to harvest at the same time. This is because the first pegs that form mature more slowly than those that form later.

Within three months of planting, you can begin harvesting by lifting the plants out of the soil using a pitchfork. For dry peanuts, pile the plants into fluffy, well-aerated piles. Allow your peanuts to cure this way for 5 to 10 days of warm temperatures with relatively dry weather—meaning no rain. Pick off the peanuts, wash them, and then roast them for a tasty snack.

All pods do not mature at the same time so deciding when to harvest can be an issue. Runner peanuts mature in about 135 to 155 days after planting. Valencia peanuts grown for boiling purposes may mature in as little as 75 days from planting but even this can vary between 15 and 30 days depending on when they are planted in the season.

If you plan to dry your peanut crop, open a few of the pods before digging them all out and look for seeds that are turning darker, which indicates maturity.

Peanuts can be vulnerable to a wide variety of garden pests. You can safely use most of the normally used vegetable garden insecticides, however always be sure to check the label for special peanut directions. Additionally, peanuts are vulnerable to tomato spotted wilt virus (TSWV). Fungicide applications are generally required every two weeks for a high yield. Leafspot is also major crop disease. Some fungicides used on garden vegetables can be used to deal with leaf spots and rust on peanuts.