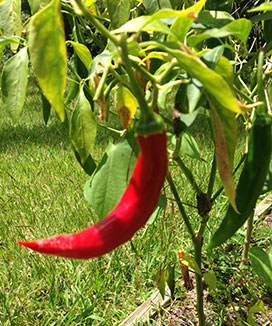 Whether you grow them to eat or just to admire, hot peppers will add a kick to your garden.

Hot peppers are a fun vegetable crop to grow during the summer in Florida. Unlike some other vegetables, hot peppers will keep producing even when the temperatures and humidity climb.

Hot peppers get their spicy flavor from a compound known as capsaicin, and the relative spiciness of peppers is compared on a heat index known as the Scoville scale. Milder peppers like Anaheims or jalapenos rank between 1,000 and 10,000 Scoville units, while spicier peppers like the cayenne or habanero can check in at 50,000 or 250,000 Scoville units. There is even a pepper called the Trinidad Moruga scorpion that measures more than 1.2 million Scoville units. And for the truly adventurous, there's the Carolina Reaper, measuring at 2.2 million Scoville units! Learn more about the Scoville scale in our article on peppers ranked by their intensity of heat.

The datil (Capsicum chinense) pepper has long been grown in St. Augustine and has very hot, small blunt fruits that ripen to a bright yellow-orange. They have been compared to habanero peppers, but datil enthusiasts say the flavor is more complex and fruity. Local legend says they were brought to Florida from Spain by Minorcans. Datil peppers are popular in hot sauces and dishes like chicken pirlau and Minorcan clam chowder.

There are many specialty hot pepper varities; here are a few suggested for Florida gardens.

Add hot peppers to curries, stir fries, and other dishes to increase the heat. Another popular option is making your own hot sauce.

Even if you don’t want to eat them, hot peppers can still be fun to grow. Their colorful fruits can be red, purple, yellow, or orange, and they easily add interest to landscape beds and containers. In fact, some pepper varieties like 'Black Pearl', 'Calico', 'Purple Flash', and 'Sangria' are grown almost exclusively for their ornamental value.

You can buy hot pepper transplants at your local garden center, or you can start your own from seed. If you’re interested in trying some of the more exotic varieties, like the ghost pepper, you may need to order seeds online.

For best success, choose varieties that are known to do well in Florida and that are resistant to diseases. Be sure to wait until after the last frost date before you plant your peppers in the spring.

Like most vegetables, hot peppers need full sun in order to produce a good harvest. If you have sandy soil, be sure to add plenty of organic matter to the planting site. If you are planting peppers in containers, use a well-drained potting media.

It's very important that you plant hot peppers away from patios, walkways, or any areas accessible to small children and pets. The same properties that give these peppers their flavorful heat can also cause painful irritation in eyes and on skin.

Fertilize your peppers at the time of planting, and then again two to three times during the growing season. You can also use a controlled-release fertilizer for season-long feeding. Hot peppers are relatively drought tolerant, but you should water them regularly to keep them productive. As for pests, the pepper weevil can be a problem.

Your peppers will be ready to harvest once they’re firm and crisp. Use caution when handling hot peppers.