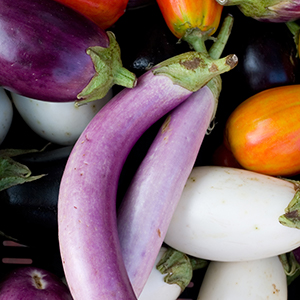 A variety of eggplants on display at the Downtown Farmer's Market in Gainesville, Florida. Credit: Tyler Jones, UF/IFAS

Native to South Asia, eggplant is a member of the nightshade family, Solanaceae. It is a botanical relative of tomatoes, potatoes, and peppers. Like other members of the family Solanaceae, its leaves and flowers are poisonous. Eggplant's fruits, however, are versatile and delicious!

In much of Europe this vegetable is called aubergine, a name derived from Arabic. Eggplant is a newer common name. It is commonly used in North America and Australia and references the egg-like appearance of smaller, white fruits. Two separate species share the common name eggplant: edible varieties (Solanum melongena) and ornamental varieties (including S. ovigerum). This article describes edible eggplant, S. melongena.

Eggplant is a crop found across the globe, and in many varieties. The plant itself can grow up to six feet tall, and may need to be supported. Pinching the terminal buds (top-most growing tips) will cultivate a bushier form. Eggplant leaves are large and coarse, and the stem is often spiny. Botanically, the fruit is considered a berry and contains many small, soft seeds. The seeds are edible but can be bitter.

Eggplant cultivars produce fruits in a variety of shapes, sizes, and colors. Depending on your preferences you can grow eggplants that are large or small, round, pear-shaped, or elongated, purple, lavender, black, yellow, white, maroon, or even striped! Despite the kaleidoscope of forms, the flavors are similar and can be used interchangeably in most recipes.

Varieties that will thrive in Florida include 'Black Beauty', 'Dancer', 'Dusky', 'Long', 'Ichiban', and 'Cloud Nine'. Thai and Japanese varieties do well in Florida, too. Dwarf varieties are available and tend to be very compact; some can be grown in containers.

In most of Florida, eggplant can be grown successfully in both the warm season and cool season. It prefers sandy loam and temperatures between 70 and 85 degrees Fahrenheit. Raised beds, mulching, and drip irrigation are appropriate growing techniques for this vegetable. Eggplant prefers evenly moist soil, but usually requires less water than tomatoes. 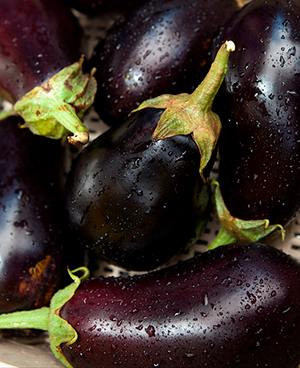 In North Florida, start eggplant in your garden between February and March, or in August. For Central Florida gardens, start between January and February or between August and September. In South Florida eggplant can be successfully started anytime between August and February; it is usually grown only in the cool season in this region. These planting dates are important. If the weather is too hot or dry the fruits take on a bitter flavor.

Eggplant can be grown from seed or transplants, but in most cases transplants are recommended. The flowers are self-pollinated, but "buzz pollination" by bees can help. Because so many varieties are available, follow the supplier's instructions for plant spacing, depth, etc. Depending on the variety you may need to stake plants to keep them growing upright.

Harvest the fruits when they're large and glossy. Overripe fruits turn dull and may yellow. Eggplant can be eaten with the skin peeled off or intact. The flesh discolors quickly, so cut immediately before preparing.

Eggplant is susceptible to the usual range of garden pests: aphids, beetles (commonly flea beetles), caterpillars, thrips, etc. Spidermites and leafminers can cause serious damage to young plants. Practice proactive Integrated Pest Management for a good harvest. Eggplant is vulnerable to a number of bacterial, fungal, and viral diseases. Cultural practices such as crop rotation, cleaning tools, and irrigating appropriately usually prevent these issues from becoming serious in home gardens.