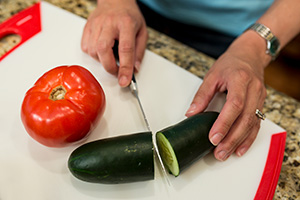 Cucumbers are a popular garden crop worldwide. Fresh or pickled, they're refreshing and versatile. Cucumbers are easy to grow, too. And as a crop high in vitamin C, Florida gardeners can feel good about adding this to their veggie patch.

Cucumbers (Cucumis sativus) are a member of the Cucurbitaceae family. They are a close relative of summer squash, pumpkin, luffa, and winter squash. Cucumbers grow on vines with long, broad, prickly leaves. They continually produce fruit on new growth.

The shape of cucumber fruit is long and cylindrical. Their color is yellow-green to dark green. The skin texture is either spiky or smooth. At maturity, cucumbers have dark green skin and soft seeds.

Cucumber flowers and fruit develop where the leaves join the stem. The flowers are either male or female. Both types are small, yellow, and bowl-shaped. The female flower produces the fruit and has a tiny cucumber-like base. This is the undeveloped ovary. Different varieties of cucumber produce different size fruits. Burpless varieties are long and tender, and eaten fresh. Pickling varieties are smaller and tougher.

Cucumbers in Florida can be grown outside in a garden or inside a greenhouse. UF/IFAS recommends several varieties for Florida. There are slicer and pickling type varieties. Slicer types include 'Sweet Success', 'Poinsett', 'Ashley', 'MarketMore 76', 'Straight Eight', and 'Space Master'. Pickling types include 'Eureka' and 'Boston Pickling'. These can also be used fresh. 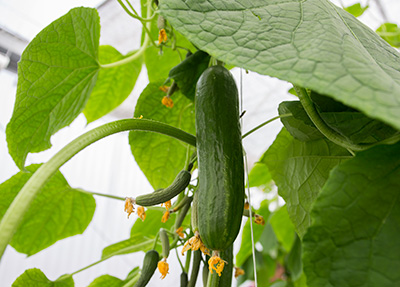 The cucumber is a warm season crop. It grows best between 80°F and 85°F. It thrives in an abundance of sunlight. Cucumbers grown outside are very sensitive to temperatures less than 31°F. They will require freeze protection from late November through February.

In South Florida, cucumbers grow best on gravelly soils. The soils must be at least six inches deep above the bedrock.

Cucumbers are sensitive to flooding. Still, they require frequent watering. The large, thin leaves of cucumber causes them to dry out faster than thick-leafed plants. Changes can be made for gardens at low elevations. These include using raised beds and well-drained soils.

For fruiting crops like cucumbers, too much nitrogen in the soil can cause harm, including excessive leafy growth. It can also negatively impact flower and fruit production. On the other hand, phosphorus and potassium can improve flower and fruit production. We recommend gardeners apply a balanced, slow-release fertilizer as needed. A soil test report can help determine what nutrients, if any, are necessary.

Cucumber rows are usually 36 to 40 inches wide and six to eight inches high. Rows are spaced two feet apart with six to twelve inches between plants. Cucumbers are a vining plant and will spread out as a groundcover. Trellising your plants can help save space and may improve yields.

Seeds should be planted one-half to three-fourths inches deep. Irrigate the bed and keep it moist for at least one week after planting. This promotes seed germination. Cucumbers will be ready to harvest 40 to 65 days later. Big box stores offer cucumber plant transplants for sale. However, they are very sensitive to root damage. Therefore, UF/IFAS does not recommend transplanting cucumbers. Direct seeding is best for this crop.

Some greenhouse cultivars don't require pollination. However, cucumbers grown in outdoor settings rely heavily on pollinators, specifically bees. If your cucumber plants are not setting fruit, a lack of pollination may be a problem. Consider planting pollinator-attracting flowers nearby. 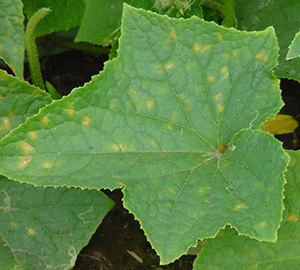 Scout and monitor your garden frequently. Caterpillar species like to hang out in the new leaves. Other major pests of cucumber include melon thrips, melonworm, pickleworm, and spidermites. Cucumbers are also sensitive to fungal infections like powdery and downy mildews, especially in the warmest parts of the year.

Catching fungal infections early will make them easier to manage. Another preventative option is to plant resistant varieties. This is important if downy mildew is typically an issue in your area. Varieties include 'Cortez', Daytona', 'Dominator', and more.

For more information about cucumbers, contact your county Extension office.