Cover Crops for the Edible Garden 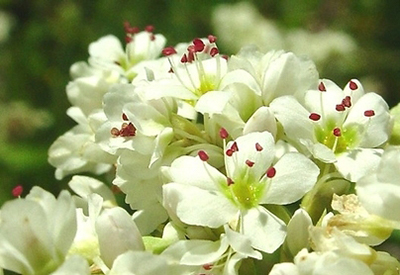 Cover crops can really make a difference in the quality of the soil in your edible garden. They have the potential to improve the physical, chemical and biological properties of the soil, supply nitrogen, and attract beneficial insects. It's that last benefit—attracting beneficial insects—that many gardeners choose to focus on.

Buckwheat (Fagropyrum esculentum) is a cool-season annual that grows in spring and fall in North Florida and in the winter in South Florida. Because of its short life cycle, buckwheat makes a great cover crop—the hollow stems decompose rapidly once incorporated into the soil, providing the soil with nutrients. Because it decomposes so rapidly, it is well-suited as a green manure but not a surface mulch, particularly on soils that erode easily. Varieties include semi-dwarf types like 'Manor' and 'Mancan', which have large seeds, leaves, and stems, and are prolific seed producers. Buckwheat is successful in many types of soil, grows up to about 3 feet tall, and flowers continuously through its growing season. Plants germinate in three to five days and produce flowers in three to five weeks. The arrangement of buckwheat's white flowers provides the perfect habitat for small beneficial insects and pollinators who come to feed on the pollen. 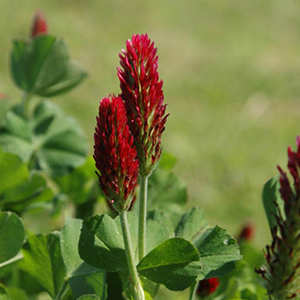 Clover is a commonly seen cool-season annual that flowers in early spring. Clovers add nitrogen back into the soil, making them a useful choice for the edible garden. Crimson clover (Trifolium incarnatum) is frequently seen along roadsides where it is planted for highway beautification, but it can be used in your garden as well. The flowers are 2 inches long and bright red, while leaves are dark green. Crimson clover does best in heavy, well-drained soils and is widely grown in North and Northwest Florida. It can be grown in Central and South Florida, however it stops flowering and growing fairly early.

For a legume of a different color, white clover (Trifolium repens) grows well in Florida. These cool-season legumes spread by stems that root at nodes. White clover is a perennial in most places, but in Florida it often behaves as an annual. This legume grows best in cool temperatures and in fertile, well-drained soils. White clover tolerates fairly wet soils but will not thrive in areas with prolonged flooding. It will be most successful in soils that remain moist in fall, winter, and spring.

Vetch (Vicia villosa) or hairy vetch is an interestingly named legume that thrives during the winter. Like other legumes, this plant is wonderful for adding nitrogen to your soil. Vetch has ½-inch long dagger-shaped leaves. In springtime, these plants produces small purple flowers which are quickly followed by inch-long seed pods. Honeybees and other native pollinators frequent the flowers while birds and animals consume the seeds. Vetch can be grown in your garden and then worked into the soil to add nitrogen and organic material as a green manure. These plants grow in full sun to partially shaded areas and reach 6 to 12 inches tall.

Lupin (Lupinus angustifolius) is a cool-season annual legume and an excellent cover crop that is adapted to well-drained soils in northern and western Florida. Lupin plants produce flowers that can be blue, white, or yellow. Tifblue, Frost, and Tifwhite are some of the recommended lupin varieties for Florida. 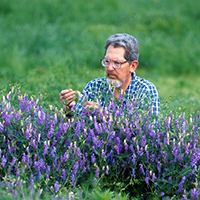