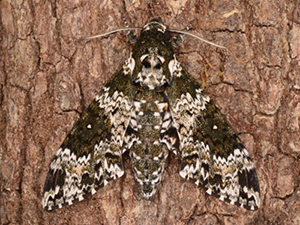 Moths often don’t receive the same love as their day-time counterparts, butterflies. Generally speaking, moths are less commonly seen, they don’t stand out as vibrantly, and are often active at night. While we may see more butterflies during the day, the number of moth species world-wide far outnumbers the number of butterfly species.

Around the world, some of the largest moths belong to the Sphingid family. Sphingid moths have long narrow wings and thick bodies that are covered in hairs. The forewings are much longer than the hindwings. The hairy bodies are pointed at the head and back of the body. Because of their size and appearance, these moths are sometimes mistaken for hummingbirds — they are sometimes called hummingbird moths. And like hummingbirds, these moths hover over flowers to consume nectar.

Other names you will often hear used for these moths are hawkmoths and even sphinx moths; this is because when the larvae feed among the leaves and branches of a host plant they can often be found in a position that looks like a sphinx.

These nocturnal moths visit night-blooming flowers to feed on nectar. Plants that attract hawkmoths are called sphingophilous; they often have flowers that are unique, with deeply sequestered nectar accessible only to hummingbirds and moths with long proboscises (an elongated, tubular sucking mouthpart).

Manduca rustica is native to the southeastern United States. Adult moths have a pattern of blacks, whites, and browns across their bodies that helps them blend into the bark of trees as a form of camouflage. The caterpillars of rustic sphinx moth feed on various ornamentals including gardenia, sunflower, lantana, and ligustrum. (Photos: Lyle Buss, UF/IFAS)

Also called giant gray sphinx, Pseudosphinz tetrio is common in the American tropics and sub-tropics. Adult moths have a pattern of browns, blacks, greys, and whites on their wings. The caterpillars are commonly called frangipani hornworms, as they feed on frangipani and other members of the dogbane family. The caterpillars are eye-catching, with black velvety bodies that have yellow rings and an orange-red head and reach up to 6 inches long. (Moth photo: William M. Ciesla, Forest Health Management International, Bugwood.org; caterpillar photo: Gino Nearns, UF/IFAS)

Xylophanes tersa is mostly adorned with a pattern in shades of brown. These moths feed on nectar from pentas and honeysuckle flowers. The caterpillars are known to be a pest of ornamental plants like pentas. (Photos: Rebekah D. Wallace, University of Georgia, Bugwood.org)

Manduca quinquemaculata’s common name refers to the pairs of orange-yellow markings along the sides of the moth’s abdomen. The caterpillars are called the tomato hornworms, they feed on members of the Solanaceae family which includes tomato, peppers, eggplant, and potatoes. (Moth photo: John Capinera, UF/IFAS; caterpillar photo: Paul Choate, UF/IFAS)

Manduca sexta can be differentiated from the five-spotted hawkmoth because it typically has six pairs of orange-yellow abdominal markings, otherwise they're hard to tell apart. Their caterpillars are also similar in appearance; the Carolina sphinx moth caterpillars are called tobacco hornworms and also feed on members of the Solanaceae family. (Moth photo: John Capinera, UF/IFAS; caterpillar photo: James Castner, UF/IFAS)