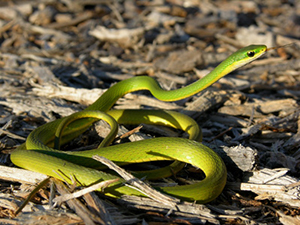 The sight of a snake in the garden may send some gardeners into a panic. You may think, what was that? Is it dangerous? Is it venomous*?

Snakes get a bad reputation as aggressive and dangerous creatures, but the truth of their nature is much different than the myth, as is so often the case.

You hear a lot in the news about two introduced snake species, pythons and anacondas, thanks to the havoc they cause. But there are many native snakes in Florida that play an important ecological role. Snakes regulate rodent populations, and with rodents being a world-wide spreader of disease, finding an appreciation for snakes is a great thing to strive for. In turn, snakes themselves are also a food source for many native animals.

Snakes in the state are being threatened. The combination of habitat loss, road mortality, and persecution by people has hit snake populations hard; thousands are killed every year. It's possible for snakes and people to safely live together, but gardeners and residents need to learn to identify, understand, and respect these interesting reptiles.

Of the 46 snake species native to Florida, only six are venomous. There are a number of non-venomous snakes you may find in your garden, including black racers, southern ring-necked snakes, rat or corn snakes, garter snakes, and rough green snakes. Learning to identify them—in both their adult and juvenile forms, since juveniles often look quite different than mature snakes—can help you worry less when you see one. Just knowing that a snake is non-venomous is often enough to calm the nerves of many gardeners. 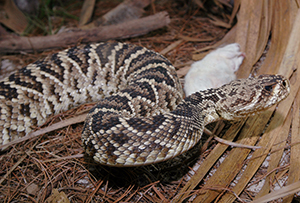 As we referred to earlier, snakes are venomous, not poisonous. Something is poisonous if it is toxic when touched or ingested; venomous means the animal is capable of injecting venom. Learn more about the difference in this fascinating article from Smithsonian.com, "What's the Difference Between Venomous and Poisonous Animals?"

Living (and Gardening) with Snakes

Snakes play an important ecological role in Florida, and should be treated with respect when found in the landscape. The best way to protect yourself while gardening is to wear thick boots and gloves, and take care when working in areas that may serve as a hiding place for a snake. A Florida-Friendly yard provides a safe haven for our misunderstood, scaly friends.

Most snakes will actively avoid interactions with people and only strike out when cornered, approached, or attacked. So going after a snake with a shovel is probably the least-safe option that might cross your mind. A snake is not going to come after you if it does not feel threatened.

It cannot be emphasized enough; we recommend you leave it be when it comes to snakes. This is the safest approach for you (whose safety you are primarily concerned with) and the snake. And if you think a snake may be venomous, call a professional. While it's best to never approach any snake, approaching a venomous snake can be dangerous, even deadly. The Florida Fish and Wildlife Conservation Commission has a list of professionals you can consult. 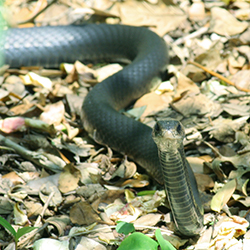