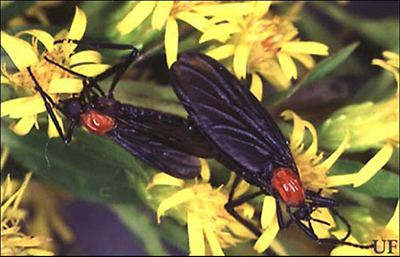 Lovebugs may be a familiar summer and fall sight to many people in the South, but these nuisance insects don’t get a lot of love.

Lovebugs do not bite or sting people, but their swarming presence is at best an annoying occurrence and at worst a mess all over your car.

What are these bugs, where do they come from, and really, what role do they play in the ecosystem?

A bit about lovebugs

Lovebugs are easily identified by their slender, black bodies and red to orange thorax (mid-section). Often you see two mating bugs, attached to each other at the rear — this is where these bugs get their common name. You’ll see lovebugs appear twice a year, once from April to May and again from August to September.

There are two species of lovebugs known to live in the United States. One is a native species and the other is an invasive species first identified in southern Louisiana in the 1920s, reaching Florida in 1947.

But what do lovebugs do, other than mate and coat cars with their bodies? Females lay eggs under plant debris and decaying vegetation. Larvae act as decomposers by feeding on that decaying vegetation. Adults do not bite or sting. They feed primarily on nectar, particularly from sweet clover, goldenrod, and Brazilian pepper plants.

Dealing with the nuisance

Lovebugs are generally the most annoying when they litter the front of vehicles. If left on your car, lovebugs can damage the paint and finish. There is actually a good reason as to why they are such a problem for cars. They congregate in high numbers along highways. Additionally, they mate in swarms that are most dense from one to five feet above ground — perfect height for being in the way of moving vehicles.

Knowing this doesn’t really help you keep your car bug free though, so what can be done? One thing that can be done is to travel at night. Since lovebugs reach peak activity at 10 am and stop flying at dusk, motorists can largely avoid them by traveling in the evening. Additionally, traveling at slower speeds will reduce the number of bugs that will be spattered.

Waxing your car can help reduce the damage caused by lovebugs, as they are more easily removed and the chance of damage to the car’s finish is lessened if the car has been recently waxed.

No matter what, lovebugs should be washed off the car as soon as possible. When the remains are left on an unwaxed car for several days, the finish will often be permanently damaged. Soaking lovebugs that are on your car for several minutes with water will make removal easier.

Unfortunately there isn’t yet an effective way to control these annoying insects, so the best course of action is to try and limit the damage they cause and not let them ruin your day.

Not sure how to respond when someone says "UF created lovebugs"? Read this 2004 article (yes, we've been answering this question repeatedly for a long time): Fact or Fiction? The Truth About Those Pesky Lovebugs.