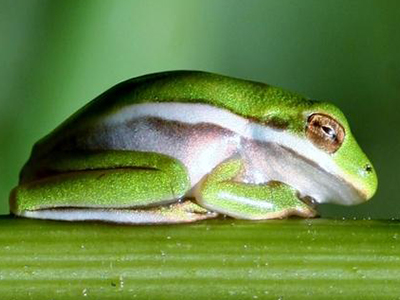 If you're gardening for wildlife, you may see or hear frogs in your garden. This is a good thing! Frogs are beneficial creatures to be sure; they're voracious insect consumers as adults.

Florida is home to a large number of native frogs—27 species to be exact—belonging to five different families.

Additionally, there are now four species of non-native frogs living in Florida. Two, the Cuban treefrog and the cane toad, have been found to impact native populations, while the third, the greenhouse frog, is not considered invasive. The African clawed frog is the fourth and most recent invader.

Some frogs are commonly called toads; the southern toad is one example. However, true toads belong to the Bufonidae family. All toads are frogs, but not all frogs are toads — toads are a specific kind of frog.

While you may be able to see and identify the frogs in your landscape, frogs can also be identified by their calls. The Florida Museum has a database of frog calls.

Florida's frogs vary in appearance and what type of habitat they call home. Scientists group them by where they spend the majority of their time: terrestrial species, arboreal species, or aquatic species. 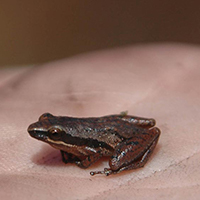 Terrestrial species live on the ground. Oftentimes these frogs live under plants, logs, or other cover; many species burrow in loose soil. Terrestrial frogs often have dry, somewhat bumpy skin. Some of the terrestrial frogs that can be found in Florida include the southern toad, the little grass frog, and the southern chorus frog.

Arboreal frog species live off the ground, in trees or bushes or even on buildings. They have somewhat enlarged, sticky toepads, and most species are excellent climbers. Four species of arboreal frogs are found throughout Florida: the barking treefrog, the green treefrog, the pine woods treefrog, and the squirrel treefrog.

Aquatic frog species spend most of their time in the water and usually have well-developed toe webbing. Three species of aquatic frogs are found across Florida: the pig frog, the southern leopard frog, and the southern cricket frog.

For more information, you can visit the UF Department of Wildlife Ecology's Johnson Lab website on Florida's frogs. 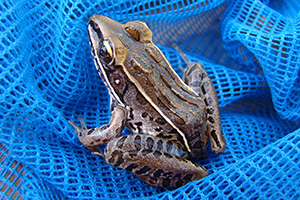