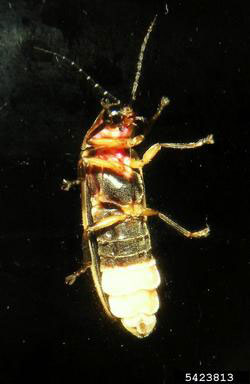 They are not flies or bugs, but are actually beetles (order Coleoptera). And there are many firefly species, including 56 species found in Florida.

The firefly is able to produce bioluminescence—its famous light—with chemicals in its body, luciferin and luciferase. They use this light to attract mates, and each species has a different pattern of flashes.

Females fireflies deposit their eggs in the ground, which is where larvae develop to adulthood. The larvae have three pairs of legs and are turtle-like creatures with tiny glowing spots on their underside. Since larvae can't reproduce, scientists think the bioluminescence is also used to warn off potential predators.The larvae of most firefly species are specialized predators and feed on other insect larvae, snails, and slugs.

Fireflies come out at dusk or nightfall in woods or wetlands during the summer. Different species of fireflies prefer different habitats; some spend most of their time in the upper branches of trees, while others live in shrubs, and still other prefer open, grassy areas.

Some scientists think fireflies can be deterred by brightly lit urban areas, and that their populations may be decreasing because of mosquito spraying.

To provide habitat for fireflies in your landscape, reduce or eliminate artificial lighting and keep pesticides to a minimum. 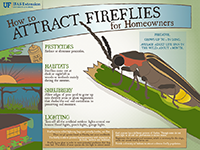 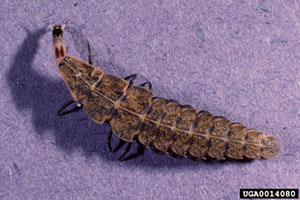