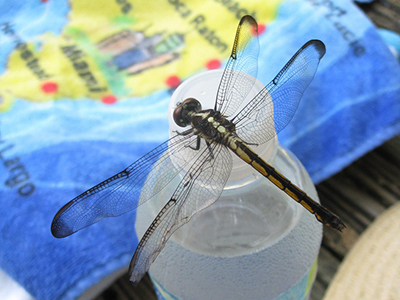 Dragonflies are beneficial insects that have been around for more than 300 million years. Not only are they fun to watch, these fast-moving fliers eat annoying insects like mosquitoes and flies. Despite their fierce name, dragonflies do not sting or bite people. Their presence in your garden can only bring the benefits of living pest control that's also fun to watch.

How fast are dragonflies, you may wonder? Well, they fly at speeds up to 30 miles per hour! This speed helps them avoid predators like birds and frogs and enables them to capture their own food. Their huge compound eyes help them see prey, which they catch in mid-air.

Most dragonfly females lay their eggs in mud or water. The nymphs hatch within a few weeks and then live in water for up to two years. Because of this, dragonflies are especially numerous near bodies of water.

Did you know that dragonflies can also be migratory? In many parts of the country, these lovely little insect eaters are only seen in the warmer months. Here in Florida though, we're lucky—not only do we get a seasonal influx of dragonflies migrating south to breed, our state is home to many full-time resident populations. There are over 100 species of dragonflies found in Florida.

Dragonflies often have interesting and descriptive names that based on wing characteristics, flight patterns, and reproductive habits. Clubtails, darners, skimmers, and biddies are some of the common groups of dragonflies.

Just a few of the species found in Florida are listed below. The Dragonfly Society of the Americas has a wonderful website, Odonata Central, which provides information and field guides for dragonflies. You can narrow your search by state or even county to find out what dragonflies you may see in your area.

The great pondhawk (Erythemis vesiculosa) is entirely green with dark abdominal bands; it can be found in much of Florida and can be seen in large numbers in South Florida during migration.

The common green darner (Anax junius) is a lovely, generally jewel-toned dragonfly. You can distinguish adult males thanks to their blue abdomens; females are green. Immature dragonflies of this species have violet abdomens. Found throughout Florida, these migratory dragonflies breed in the south and tropical areas in fall and early winter. 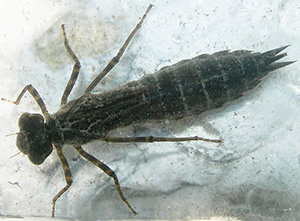 A dragonfly spends most of its lifespan in water as a nymph, the larval stage, where they are voracious predators.