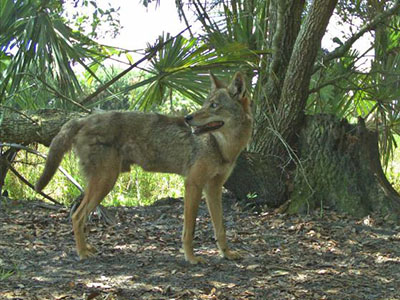 Gardeners often strive to create a backyard environment that is comfortable and inviting to both people and wildlife. But sometimes these natural spaces we cultivate can draw unexpected animal visitors, like coyotes.

Found in every county throughout Florida, the coyote (Canis latrans) looks a lot like a small German shepherd. They are relatively small, with adult males weighing 25 pounds on average, and females weighing less. Coyote coat colors often include mixtures of rusty brown, tans, whites, grays, and even black. The color varies based on region, as well as the individual coyote's age and whether it's male or female.

Coyotes can be found in a variety of habitats including areas with high human development and activity. They are omnivorous (meaning they eat both animals and plants) and opportunistic foragers. Coyotes are active year-round, and they play an important role in our ecosystems by keeping rodent populations under control. They're active at all hours, but are most likely to be seen (and heard) at dawn and dusk.

Signs of a coyote in your landscape include tracks (which can be difficult to differentiate from dog tracks), scat, trails, and vocalizations (howls, yips, barks, etc.). Coyote tracks are generally more narrow and elongated than domesticated dog tracks. But you're more likely to hear coyotes than you are to see them. Coyotes are social creatures that use a variety of sounds including howls, yips, and barks, combined with scent-making to communicate.

Incidents of coyotes hurting humans are extremely rare. They are more of a risk to pets and livestock than to humans. Coyotes have been known to prey on cats and small dogs, so if you suspect coyotes in the area, keep your pets safe by not allowing them to roam freely. This is particularly important at dawn and dusk when coyotes are most active. Coyotes are opportunistic eaters, so it’s important to not leave anything out and easily accessible that they might find edible. That means making sure that garbage is secured and that things like pet food, fallen fruit from trees, and scattered seed below bird feeders is cleaned up. Like all wild animals, coyotes should never be approached.

Coyotes play an important role as predators, reducing the number of nuisance animals that can also be in your environment, like rodents. So listen to the noises in the night one evening, and you may hear the call of these elusive wildlife visitors.