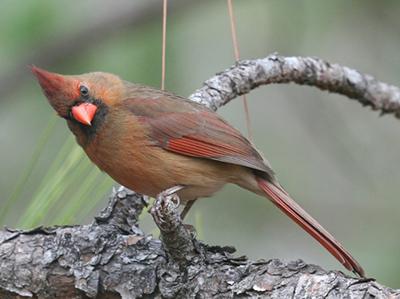 The female cardinal isn't quite as bright as her male counterpart, but is pretty nonetheless. Photo: Johnny N. Dell, Bugwood.org.

Bright colors are always a great addition to the landscape, but the color doesn’t always have to come from flowers or foliage; sometimes birds can bring on the color.

Cardinals (Cardinalis cardinalis) are some of the most easily recognized birds. They can often be seen perched on a branch slightly hunched over with their long tails pointed down. In winter cardinals stand out against the evergreens or leafless trees and in the summer their whistles are one of the sweet sounds of morning. These birds don’t migrate so you can enjoy their presence year-round in your landscape.

Did you know that very few female North American songbirds actually sing? The Northern cardinal is one of those singers. They often sing while sitting on their nest — it’s not often that wild animals resemble their cartoon depictions, but for female cardinals, fiction matches the truth.

Male cardinals aggressively defend their breeding territories, to the point that they can be seen attacking their own reflection in a shiny surface. Actually, both males and females have been known to do this, particularly in spring and early summer. Birds have been observed spending hours fighting these imaginary villains. 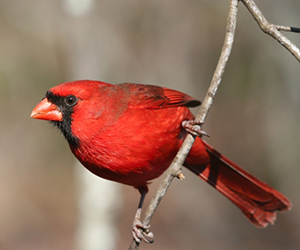 Cardinals live in open woodlands and are one of a few species that has been helped by urban sprawl, which contributed to its expanded range northward.

Cardinals eat mostly seeds and fruits, supplementing their diet with insects. They do not only forage for their food on the ground; when canopy develops they eat buds on trees and shrubs, and insect larvae as well. In fall, they take fruits and seeds from plants and the ground. Nestlings are fed mostly insects. Cardinals are not picky about bird feeders and will use almost any one you put out. These birds do seem particularly to enjoy sunflower seeds, so be sure to use them if you want to have some happy cardinals.

They usually sit low in shrubs and trees, or can be seen foraging on or near the ground. Cardinals nest in dense foliage and favor conspicuous and fairly high perches for singing. They're somewhat reluctant flyers, choosing to make short, low trips between thickets while they forage. This behavior makes cardinals especially vulnerable to cats, so be sure to keep your furry hunters indoors.

Nesting sites for cardinals tend to be wedged into forks in small branches in saplings, shrubs, or vine tangles that are hidden in dense foliage. They only use their nest once and these nests can be between 1 and 15 feet off the ground. Cardinals nest in a variety of tree and shrub species. Males gather materials while female cardinals build the nest, which usually take three to nine days to build. A finished nest is between 2 and 3 inches tall and 4 inches across. The nest is built in four layers: the outside is made of coarse twigs, covered in a leafy mat, lined with grapevine bark, and finished off with grasses, stems, rootlets, and pine needles.