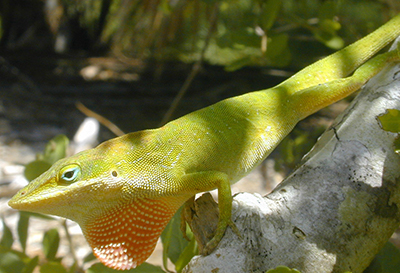 A competition for shelter and food is raging across Florida, and two related lizard species have been adapting to the presence of each other for decades.

Florida's native green anoles (pronounced "uh-noles"), Anolis carolinensis, found themselves in competition with the Cuban brown anoles (Anolis sagrei) over a century ago. Native to Cuba, the Bahamas, and the Cayman Islands, Cuban brown anoles are now the most common lizard in many urbanized parts of Florida.

Eradication of Cuban brown anoles is impossible at this point; they are too widely distributed. But don't let that stop you from providing our native green anoles with adequate habitats, like tall shrubs and trees, that allow them to move up in the environment away from the brown anoles. Gardeners shouldn't get too down about this shift in lizard dominance, though. Both species are beneficial garden predators, catching and eating beetles, flies, spiders, roaches, and other small invertebrates. So while it is interesting to know that the Cuban brown anoles are out-competing the green anoles, don't worry that there's not much that can be done to rid your landscape of these invaders. 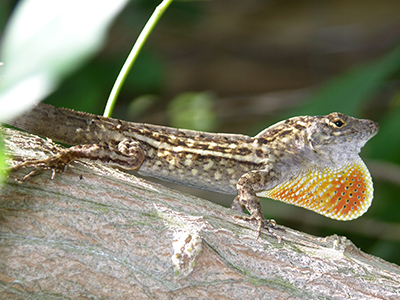 More about these two competitors

The green anole is commonly found in natural and suburban habitats through the state. These lizards are great climbers, which has helped them adapt to the introduction of Cuban brown anoles.

Adult green anoles grow to 5 to 8 inches long and males have a solid pink dewlap, or throat fan. While many people call these lizards "chameleons" because they can quickly change from bright green to dull brown, green anoles are not true chameleons, which are native to Africa and Madagascar.

The Cuban brown anole, often just called the brown anole, arrived in Florida as a cargo hitchhiker more than 100 years ago. Beyond that first introduction, studies of their DNA suggest there have been as many as seven additional invasion events of brown anoles into the state. Since its arrival, this small lizard has spread across Florida; today they can be found in both disturbed and natural habitats. Adult brown anoles are 5 to 8 inches long and are various shades of brown that is flecked with greys and browns. However, unlike the native green anoles, these lizards cannot change color. Male brown anoles have an orange dewlap with a white or yellow border. Besides the color difference, brown anoles are distinguishable by their shorter snouts.